Delhi Deputy CM Sisodia said the attacker’s Facebook profile shows that he is a member of BJP. 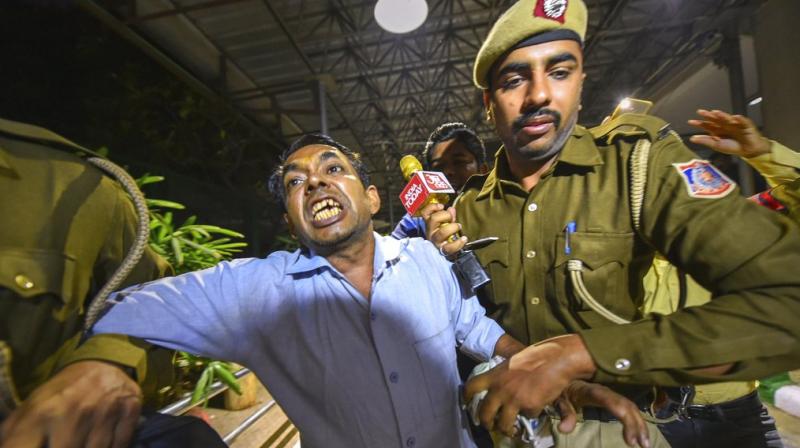 The BJP had termed the incident as ‘drama’ by Arvind Kejriwal, with its Delhi chief Manoj Tiwari demanding a high-level probe into it. (Photo: PTI)

New Delhi: Delhi Deputy Chief Minister Manish Sisodia on Wednesday alleged that the BJP leadership had knowledge of the attack on Chief Minister Arvind Kejriwal and the opposition party wants the latter eliminated to stop him from working for the people.

On Tuesday, a man flung chilli powder at Kejriwal outside his office in the Delhi Secretariat. The chief minister's spectacles broke but he was not injured in the attack.

The attacker, identified as Anil Kumar Sharma, has been arrested.

"(Union) Home Minister Rajnath Singh called Kejriwal and asked him to file a complaint in the attack on him. Is this the way an attack on a chief minister should be probed?" Sisodia asked at a press conference.

Sharma's Facebook profile shows that he is a member of the Bharatiya Janata Party (BJP), he said.

The BJP had termed the incident as "drama" by Kejriwal, with its Delhi chief Manoj Tiwari demanding a high-level probe into it.

"After failing to stop Kejriwal from working for the people of Delhi, now the BJP wants him eliminated. The entire series of events indicate that top BJP leadership had knowledge of the attack on Kejriwal," Sisodia claimed.

The deputy chief minister also lashed out at the Delhi Police, alleging it was acting on the behest of the BJP and trying to save the culprit. Even 24 hours after the attack, Delhi's Lt Governor has not reacted on it. This means that he also knew about it, Sisodia alleged.

Delhi's ruling Aam Aadmi Party (AAP) has said it will hold a protest at the BJP's national headquarters on Wednesday against the attack on Kejriwal.

Later on Tuesday, the Delhi Police registered a case against Sharma at the IP Estate police station. However, no formal complaint was received from the secretariat, a senior police official had said.