Following this, an arrest warrant was issued against Manju Verma and her husband Chandrasekhar Verma under the arms act. 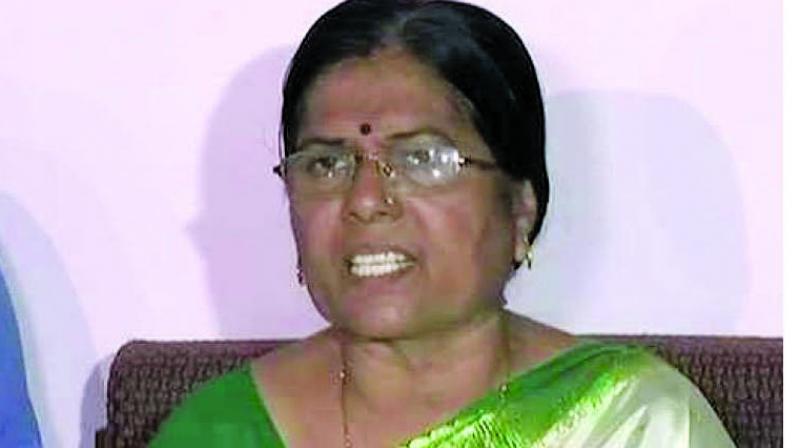 Bihar Manju Verma has been remanded to judicial custody till December 1.

Patna: Former social welfare minister of Bihar Manju Verma on Tuesday surrendered before a court in Begusarai in connection with the arms act case. Lawyers said, the former minister reached the court in an auto rickshaw and fainted as she entered the premises to surrender. She has been remanded to judicial custody till December 1.

Ms Verma’s surrender has come as a huge relief for the Nitish Kumar led state government and the police which have been under pressure after the Supreme Court recently expressed its displeasure over state’s failure to arrest her.

Additional Director General of Police  S.K. Singhal said, “Her surrender is the result of a massive crackdown launched by the police. Her movable properties were being atta-ched and the authorities were also in the process of seizing all her bank accounts. The police had also raided several locations outside Bihar in-cluding Hyderabad.”

Her husband Chandrasekhar Verma who is also a co-accused in the arms act case had surrendered in Begusarai last month. After Manju Verma was declared an absconder the JD (U) had recently suspended her from the party.

The former minister has been on the run after police recovered around 50 live cartridges from her house during a raid in August. Following this, an arrest warrant was issued against Manju Verma and her husband Chandrasekhar Verma under the arms act.

Manju Verma has been in the middle of controversy after Muzaffarpur shelter home case surfaced in July this year. She had to resign from her post after call data records (CDR) recovered by the investigating agencies revealed her husband’s links with Brajesh Thakur, the main accused in the shelter home sexual abuse case.

Police reports suggest that Chandrasekhar Verma and Brajesh Thakur spoke with each other 17 times between January and May. While Brajesh Thakur was arrested along with ten others in June, Verma had gone into hiding causing embarrassment for the JD (U) - BJP government.

In another major development Madhu, a close associate of Brajesh Thakur who has been hiding since May 31 appeared before the CBI and denied her involvement in Muzaffarpur shelter home case.

“I am not aware of Brajesh Thakur’s role in the case as I was associated with the newspaper. Everything being said about my role in the case is not true”, Madhu told reporters in Muzaffarpur while being taken to CBI’s office in the court premises on Tuesday.

According to the police Madhu is considered one of the crucial links in the shelter home case as she had been handling most of the affairs of the NGO in the absence of Brajesh Thakur.

Mumbai based Tata Institute of Social Sciences (TISS) in its audit report had revealed that the shelter home had been “running in a highly questionable manner. Several girls reported about violence and being sexually abused”.