Bhandari sailed through after Britain withdrew its candidate from a hard-fought race to the World Court. 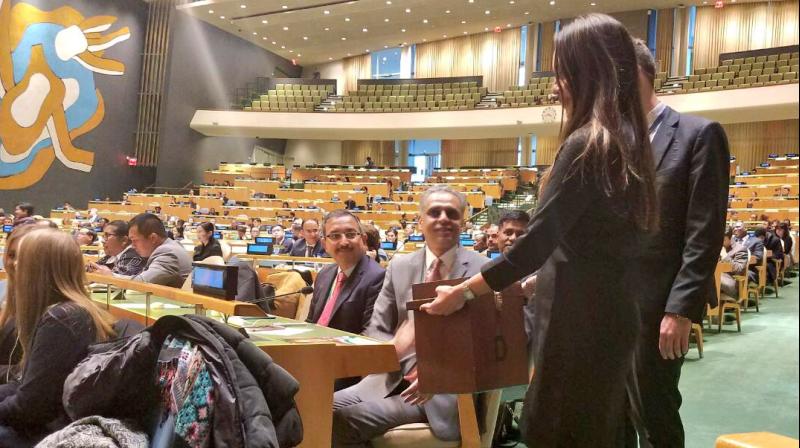 After the results came out, PM Modi expressed gratitude to members of the UN General Assembly and the UN Security Council for 'their support and trust in India. (Photo: Twitter)

New Delhi: Prime Minister Narendra Modi credited on Tuesday the efforts of external affairs minister Sushma Swaraj and foreign ministry officials for the re-election of Dalveer Bhandari to the International Court of Justice.

Amit Shah, the president of India’s ruling Bharatiya Janata Party, described Bhandari’s re-election as a “huge diplomatic win” and applauded PM Modi and Swaraj. Congratulating Bhandari, Shah said his win was a reflection of a “strong and decisive” leadership.

Bhandari sailed through after Britain withdrew its candidate from a hard-fought race to the World Court. Bhandari and UK’s Christopher Greenwood were locked in a neck-and-neck fight for re-election, as the UN could not decide between them after electing four out of five judges to the ICJ.

After the results came out, PM Modi expressed gratitude to members of the UN General Assembly and the UN Security Council for “their support and trust in India.”

I congratulate Justice Dalveer Bhandari on being re-elected to the International Court of Justice. His re-election is a proud moment for us.

Congratulations to EAM @SushmaSwaraj and her entire team at MEA & diplomatic missions for their untiring efforts that have led to India’s re-election to ICJ. Our deep gratitude to all the members of UNGA as well as UNSC for their support and trust in India.

BJP chief Shah tweeted: “With every step and effort of the Modi Government, we see the reflection of a strong and decisive leadership. I applaud Prime Minister Narendra Modi and External Affairs Minister Sushma Swaraj for this huge diplomatic win.

With every step and effort of the Modi Government, we see the reflection of a strong and decisive leadership. I applaud Prime Minister Shri @narendramodi and External Affairs Minister Smt. @SushmaSwaraj for this huge diplomatic win.

Bhandari, 70, received 183-193 votes at the General Assembly and secured all 15 votes in the Security Council to fill the final vacancy on the ICJ after separate but simultaneous elections were held at the UN headquarters in New York.

Congratulations to Justice Dalveer Bhandari on his re-election as a Judge of the ICJ. Huge efforts by Team - MEA. Syed Akbaruddin @AkbaruddinIndia our Permanent Representative in UN deserves a special mention.

For its part, Britain congratulated Bhandari and said it will continue to cooperate closely with India at the United Nations and globally.

Matthew Rycroft, Britain’s Permanent Representative to the United Nations, said in a statement that his country decided to withdraw Greenwood’s candidature.

“The UK has concluded that it is wrong to continue to take up the valuable time of the Security Council and the UN General Assembly with further rounds of elections,” he said.

“We are naturally disappointed, but it was a competitive field with six strong candidates,” Rycroft said.

“If the UK could not win in this run-off, then we are pleased that it is a close friend like India that has done so instead. We will continue to cooperate closely with India, here in the United Nations and globally,” he said.

Rycroft said the UK will continue to support the work of the ICJ “in line with our commitment to the importance of the rule of law in the UN system and in the international community more generally”.

Britain’s withdrawal from the election to the prestigious world court would mean that there will not be a British judge on the UN’s most powerful court for the first time in its history.

Based in The Hague, the ICJ has a bench of 15 judges, five of whom are elected every three years for a nine-year term.

Established in 1945, the role of the ICJ is to settle, in accordance with international law, legal disputes submitted to it by states and to give advisory opinions on legal questions.