India   All India  21 Nov 2017  4,500 cases against youth involved in stone-pelting for first time to be dropped
India, All India

4,500 cases against youth involved in stone-pelting for first time to be dropped

The decisions were considered to be part of discussions held by Sharma during his visit to the Valley for talking with all stakeholders. 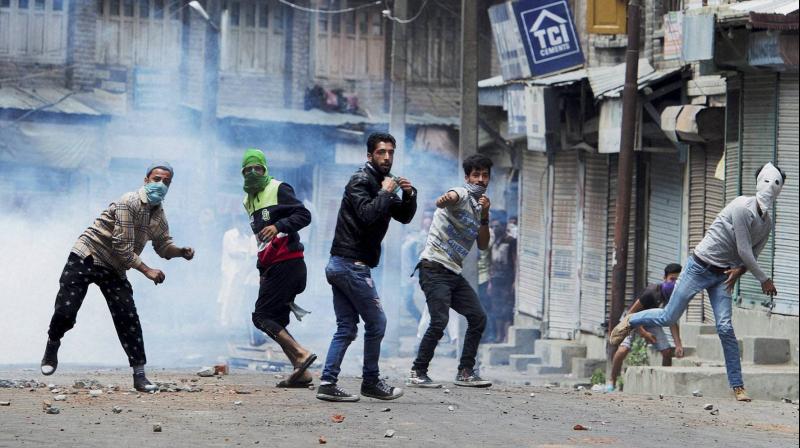 Over 4,500 cases were registered against youth who were found indulging in stone pelting for the first time. (Photo: PTI/File)

New Delhi: Taking the suggestion of the Centre's special representative Dineshwar Sharma forward, over 4,500 cases against youth involved in stone pelting for the first time will be dropped in a bid to win hearts in the Kashmir Valley, officials said.

Sharma, who visited the Valley earlier this month, was flooded with requests from various individuals and groups for withdrawing cases against youth who were booked by the police for indulging in stone pelting.

Over 11,500 cases against stone pelters were registered from July last year when unrest broke out in Kashmir following the death of Hizbul Mujahideen terrorist Burhan Wani in an encounter, they said.

Out of these, over 4,500 cases were registered against youth who were found indulging in stone pelting for the first time, the officials said.

When contacted, Sharma refused to comment on it but said "my attempt was to change the narrative in the state to peace and for that I need support of youths and students."

The officials said after seeing the response of the step, the Centre was keen to review the remaining cases against stone pelters in consultation with the PDP-BJP state government.

The Centre may also consider rehabilitating locals who have joined terrorist groups but have not indulged in any heinous crime, they said.

Sharma found residents in the Valley facing the problem of electricity shortage, especially during winters and, therefore, an additional 300 megawatt will be provided to Kashmir this year.

Attempts are being made to ensure round-the-clock electricity supply by the beginning of winter next year, the officials said, adding talks are being held with power ministry for implementing this project.

The central government will also enhance the compensation to the policemen killed during encounters. At present, a local policeman gets Rs 40 lakh.

The decisions were considered to be part of discussions held by Sharma during his visit to the Valley for talking with all stakeholders.

All these issues were discussed in detail recently at the core group on Kashmir, chaired by Union Home Minister Rajnath Singh and attended by Defence Minister Nirmala Sitharaman and National Security Adviser Ajit Doval, the officials said.

The state government is expected to take the initiatives according to the suggestions of the central government.

Top officials of the ministries of home and defence, chiefs of intelligence agencies, besides Sharma also attended the meeting.