India   All India  21 Nov 2016  Parliament disrupted after uproar over demonetisation
India, All India

Parliament disrupted after uproar over demonetisation

The opposition parties want the Prime Minister to speak in Rajya Sabha over the issue of demonetisation. 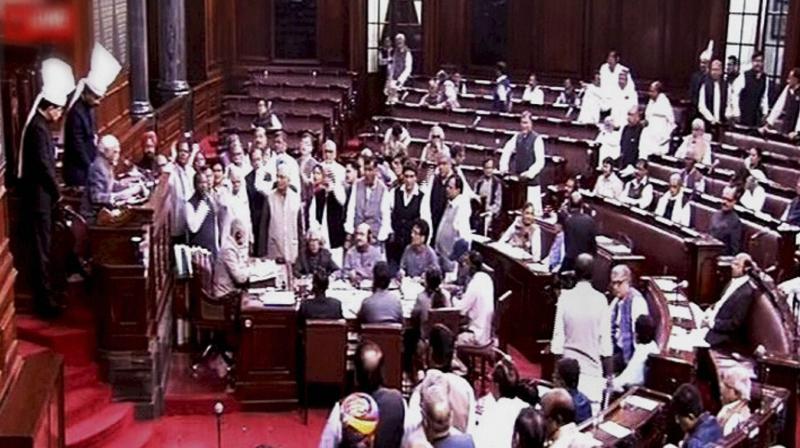 New Delhi: The Lok Sabha and the Rajya Sabha were on Monday adjourned for the day as the united Opposition escalated their attack on the government over the demonetisation move.

While Congress, BSP, TMC and CPI(M) among others wanted a resolution condoling the deaths to come from the Chair, Leader of the House and Finance Minister Arun Jaitley charged the Opposition of running away from the demonetisation debate.

Slogan-shouting opposition members rushed into the well of the House, forcing Deputy Chairman P J Kurien to first adjourn the proceedings till 1130 hours and then again till noon.

"Why are they (opposition parties) running away from debate," Jaitley asked. "This is clear now that the opposition is not ready for debate and is coming up with new excuses to disrupt the House."

Stating that the notice for suspension of business under Rule 267 was accepted on first day of the winter session and a debate had started, he said the reported deaths could come up during the course of this debate and the reply to it.

No sooner that the House mourned the death of 130 persons in the derailment of Indore-Patna Express near Kanpur yesterday, Sitaram Yechury (CPI-M) said an obituary reference condoling the death of 70 people due to hardships caused by the demonetisation should be moved by the Chair.

He was supported by Mayawati (BSP) who said people have died standing in queues because of hunger, want of medicines and waiting for currency for marriage.

Leader of the Opposition Ghulam Nabi Azad (Cong) said while condolences have been expressed for those killed in yesterday's train accident, the same should be done for the 70 people who have lost their lives in last 15 days.

"They are also citizens of this country. We want such an obituary reference to come from the Chair," he said, adding that Prime Minister Narenda Modi should also come to the House for the debate.

Kurien said if the members were ready, the discussion on demonetisation issue can resume immediately. "I would like to make it very clear that the Chair is ready for discussion if you are ready," he said.

Stating that 11 bank employees were among the 70 who lost their lives, Yechury asked the Chair to take the opinion of the House on moving a resolution condoling their death. He said the debate could be held after the obituary reference is made by the Chair.

Kurien however virtually ruled it out saying "condolences are not done on demand. That has to come spontaneously. You can approach the Chairman (on that)."

To this, Yechury said "take consensus of the House". At this point, opposition Congress, BSP and TMC members rushed into the Well shouting slogans.

No sooner did Deputy Chairman Kurien occupy the Chair and called Dilip Tirkey (BJD) to start his Zero Hour mention, Congress members trooped into the Well.

Kurien suggested that members could continue the discussion on demonetisation of currency, but Congress members kept shouting slogans and other opposition members were seen standing on the aisles.

Amid din, Minister of State for Parliamentary Affairs Mukhtar Abbas Naqvi too pitched for continuation of the debate. "Many members want to speak (on the demonetisation)," he said.

Yechury (CPI-M) again asked the Chair for an obituary reference for those who died while standing in queues outside banks due to the demonetisation move.

Kurien said there is a procedure for such references and suggested that the members to approach Rajya Sabha Chairman.

"What is the authenticity of numbers (of dead) you are speaking," he said, adding that obituary references cannot be taken up suo motu.

As Naqvi pressed for continuation of the debate on currency notes, the vociferous protests continued while BJP members kept shouting "We want discussion. We want discussion". Kurien then adjourned the House till noon.

As soon as House met at noon for the Question Hour, Opposition members again rose from their seats and started shouted slogans over demonetisation of currency.

Rajya Sabha Chairman Hamid Ansari asked the members to let the Question Hour continue, but the Opposition did not relent.

Members including those from the Congress, TMC and BSP were seen standing along their seats with many of them shouting slogans.

Following the din in the House, Ansari adjourned the proceedings for the third time today for 30 minutes.

When Rajya Sabha reassembled at 1234 hours, Opposition members rose from their seats raising slogans over the demonetisation issue.

Ansari tried to pacify the members so that the Question Hour could be taken up but his efforts were futile.

Members including those from the Congress, TMC and BSP were seen standing along their seats and several were seen shouting anti-government slogans.

As the uproar continued, the House was adjourned till 1400 hours. As the House reassembled at 1400 hours, Opposition members raised the demonetisation issue while protesting that the government had "sent a junior minister" to make a statement on the the rail accident of near Kanpur in which the death toll has mounted to 133.

Amid the din, Minister of State for Railways Rajen Gohain read out the statement, as a Congress MP tore a copy of the statement.

The Congress members then trooped into the Well raising slogans like "Gali gali main shor hai, Narendra Modi chor hai", prompting members of the Treasury bench to raise slogans against the opposition.

Members from other opposition parties including SP, BSP, CPI and TMC also rose from there seats, but did not raise any slogans. Following the continued din over currency demonetisation and the government's statement on the rail accident near Kanpur, Deputy Chairman Kurien adjourned the House for the day.

Here are the live updates from Day 4 of Winter Session of Parliament: