Trapped inside the train, they broke the window pane with the help of their mother's stick and came out after nearly an hour of the mishap. 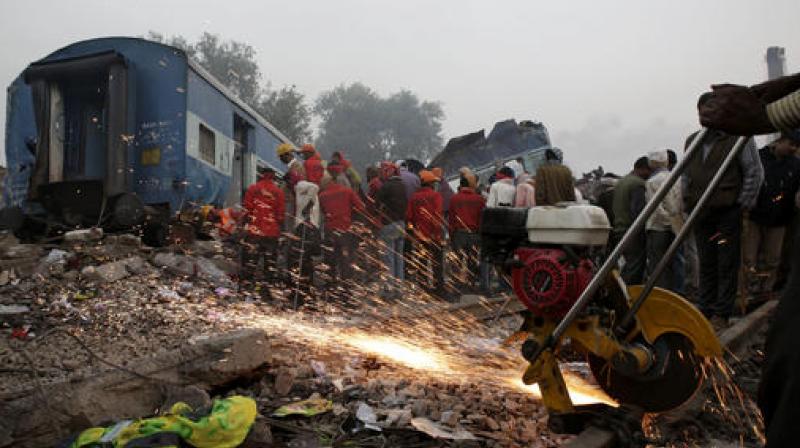 Rescuers search among the debris after 14 coaches of an overnight passenger train rolled off the track near Pukhrayan village in Kanpur Dehat district of Uttar Pradesh. (Photo: AP)

Patna: An elderly woman's "charri"(stick) proved to be the saviour for a family of seven from Muzaffarpur in the tragic Indore-Patna Express derailment in Uttar Pradesh.

The family of businessman Manoj Chaurasia of Muzaffarpur in Bihar, had boarded the ill-fated train at Indore and were going to their home in Patna.

Chaurasia said his mother's walking stick saved the lives of his family. He said that all the seven members of his family were trapped in bogey B S1 after the accident.

"Trapped inside the damaged bogey, I broke the window pane with the help of my mother's stick and came out after nearly an hour of the mishap," he said and thanked the Almighty for the providential escape.

Walking with the help of the 'life-saving lucky' stick, the elderly mother was in shock and could not speak anything.

Chaurasia's wife Nandini said while the attendant of the coach and a few other passengers in the bogey lost their lives, for them, "Maut choo kar nikal gayi (death passed off touching us)."

The family left for their home after the special train arrived at Patna junction from the accident site at Pukhrayan in rural Kanpur in Uttar Pradesh around 04:05 am on Monday.

Meanwhile, Patna District Magistrate Sanjay Kumar Aggarwal is camping at Patna junction to supervise the relief provided to victims and their kins.

The team of doctors present at the station attended to the injured and a few of them were immediately rushed to hospitals in an ambulance parked at the station, the DM said.

The district administration also facilitated those arriving by the special train to go to their homes in Madhubani, Chapra, Muzaffarpur and other places from Patna junction.