14 coaches of the Indore-Patna Express derailed near Pukhrayan of Kanpur Dehat district in Uttar Pradesh. 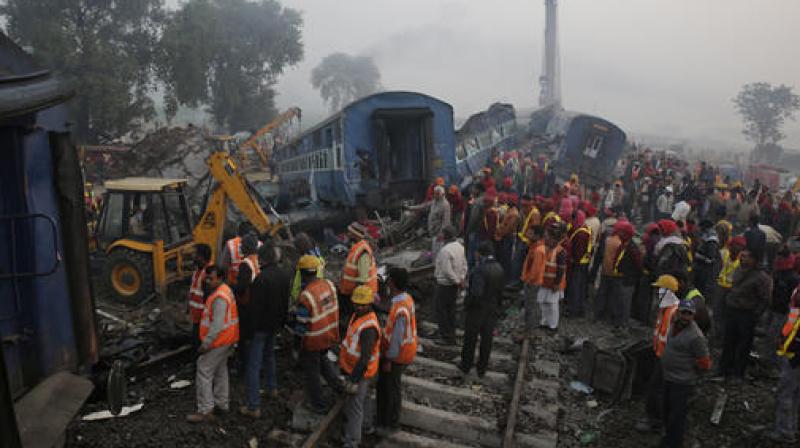 Rescuers work at the site after 14 coaches of an overnight passenger train rolled off the track near Pukhrayan village of Kanpur Dehat district in Uttar Pradesh. (Photo: AP)

Kanpur: The death toll in the derailment of the Patna-Indore Express near Kanpur reached 145 on Monday, while nearly 200 persons were injured, in what was the worst train accident in recent years.

At least 50 people have been seriously wounded and the number of dead is likely to increase.

14 coaches of the Indore-Patna Express derailed near Pukhrayan of Kanpur Dehat district in Uttar Pradesh on Sunday due to suspected rail fracture.

UP DGP Javeed Ahmed said, 123 bodies have been identified so far and 110 handed over to victim's family.

Most of the affected passengers of the Indore-Patna Express belong to Bihar and Madhya Pradesh.

NDRF, police force and civil administration were engaged in relief work on war footing. Army is also assisting in rescue and other relief work.

Union Railway Minister Suresh Prabhu has ordered a high level inquiry into the accident. Visiting the accident spot last evening, he asked officials to speed up the rescue and relief work.

Prabhu also visited Hallet hospital at Kanpur where the injured are being treated. Minister of state for Railways Manoj Sinha supervised the relief works.

Sinha said, those who are responsible for the incident will be punished, adding that all efforts are being taken to provide assistance to the bereaved families and other injured.

He further said the railway has already announced financial assistance of Rs 3.5 lakh each for the victim's family.

Besides Railways, Prime Minister Narendra Modi has also announced exgratia of Rs 2 lakh each for the next of kin of those killed and Rs 50,000 for those seriously injured which is over and above any other assistance.

The UP, Bihar, Madhya Pradesh state governments have also announced financial assistance to the family of victims of the accident.

The Prime Minister has asked the railways to work towards achieving the zero accident target to make train journey safe, assuring that the derailment of the Indore-Patna Express will be probed.

He made the remark at Rail Vikas Shivir at Surajkund on the outskirts of Delhi last evening where he along with Railwaymen observed two minute silence to condole the loss of lives.