No comparison between Indira Gandhi and Narendra Modi, says Sonia

On the future course of Congress party, Sonia was hopeful to get full majority in Parliament in the next Lok Sabha elections. 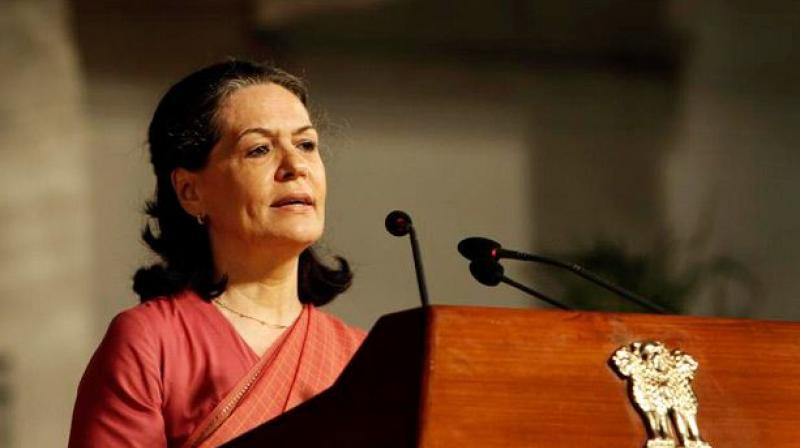 Sonia said that both her children had different aspects of Indira Gandhi in them. (Photo: AP)

New Delhi: Congress President Sonia Gandhi on Monday recalled the sacrifices made by her mother-in-law and former Prime Minister Indira Gandhi and said there is no comparison between Indira and Prime Minister Narendra Modi.

“It does not trouble me when people say Narendra Modi is like Indira Gandhi. I have my very clear views, there is no comparison,” said Sonia Gandhi in an interview to India Today.

When asked about the future course of Congress party, Sonia was hopeful to get full majority in Parliament in the next elections.

“In politics one either loses or wins. The Congress party is taking on the present government and I think we will come up from 44 seats to the seats needed to get full majority in Parliament,” said Gandhi.

On Rahul’s role, Sonia said that she was not the right person to reply on it. “I don't agree that Congress party does not have a leader to compete with Narendra Modi. We will keep fighting. Indira Gandhi was written off, she fought back, we will fight too,” said Sonia on the struggles of Congress.

On Emergency, Sonia said, “I cannot say how Indira Gandhi would see Emergency today, but if she had not felt extremely uncomfortable she would not have called for elections. There were instances when Rajivji was a pilot and on occasions he would meet people who would say this is happening and he would tell his mother. I could see that she heard him and also feel the pain of the people.”

On her stint in politics, Sonia said that she would not have been in politics had she not been with Indira Gandhi. “I thought on my side it was a bit of coward to not join. At that time there was nothing else on mind but to uphold the ideals of not just my mother-in-law, my husband and the party,” she said.

When asked about dynasty politics, Sonia said just like doctors and professors have predecessors from their family, her family too followed the path. “In a family of doctors, professors one chooses the path of the father. But there is a difference in politics as here you are elected and defeated democratically,” said Sonia.

On Indira being a freedom fighter, Sonia said that Indira grew up during the freedom movement and in fact, she was jailed as well for a short time. "Her greatest contribution was her loyalty and dedication to the country. She identified with the people, she was deeply compassionate. She had in her deep compassion and empathy for people who were in need of help. She never felt she was a woman amongst all the men, she always felt she was an equal," said Sonia.

Sonia further described Indira as a very intelligent woman who allowed Sonia space and time to get used to the new life.

"I came from a completely different culture and background, when it was decided, Rajivji before returning to India met my father and asked if he agreed to the proposal.  He was impressed by Rajivji but was worried about me. Then I was given a return ticket to stay in India for two weeks. Eventually my mother-in-law asked me if both of us decided to stay together, and then marry," said Sonia.

“Indira was completely different from what she looked like. She understood my difficulties with the culture, language since I did not know English. Our first conversation was in French.”

"She had a cute sense of humour and was a wonderful writer. She used to write letters and little notes for me and other family members. She had interests in music, classical and folk art, environment. We still miss her," said Sonia.

Earlier in the day, accompanied by Rahul and Priyanka, the Congress chief inaugurated a photo exhibition on the life of Indira Gandhi at the Nehru-Gandhi family's ancestral home, Swaraj Bhavan, where Indira Gandhi was born on November 19, 1917, in Uttar Pradesh’s Allahabad.