It was reported that about 50,000 people had been invited for the wedding and people were also ferried from mine-rich Ballari. 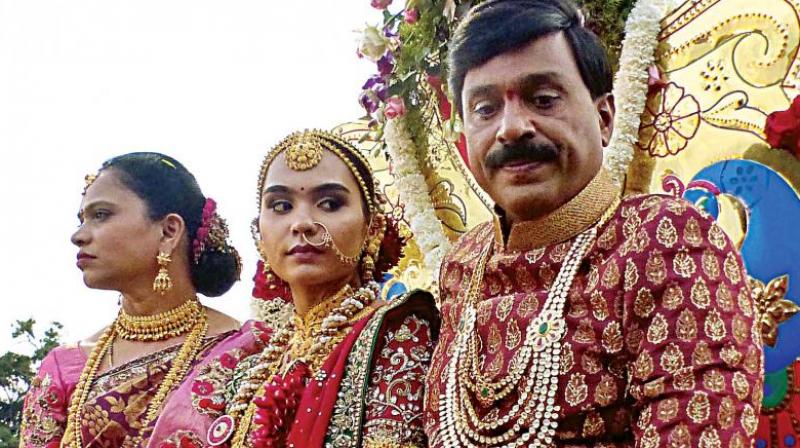 Officials said that taxmen visited seven locations in Bengaluru and three in Hyderabad of those event management companies which were given contracts to give a blockbuster look for the wedding of Bramhani last week here. Reddy is also a mining baron.

They said the department, after receiving reports of high spending for the event, initiated the action and is checking the account books, payment receipts and contract portfolios of these firms who specialise in creating special ambience and customised display for high-end spending clientele during their special events like weddings.

The firms include those providing special swiss tents, expensive cutlery, multi-cuisine food and pyrotechnic dealers who brought a lavish style to the event.

Under the survey action, tax sleuths visit business premises of the trader/operator and make analysis of the available stock and record it whereas under search operations both residential and business premises are visited by the taxman and seizure of cash and incriminating documents, if any, is effected.

Once the scrutiny of accounts and contract books is done, they said, further action of issuing notices to investigate tax evasion by both the contractor and the contractee will be undertaken.

The multi-crore wedding was in the spotlight recently for its sheer opulence and extravagance at a time when numerous people were facing a cash crunch and had to queue up outside banks and ATMs to withdraw their hard-earned money in the wake of the demonetisation of the two large currency notes of Rs 500 and Rs 1000.

The five-day extravaganza was held at the Palace grounds here with ceremonies held against the backdrop of lavish settings.

The mining baron's event presented almost a surreal picture as Bramhani entered into wedlock with Rajeev Reddy, a leading businessman's son from Andhra Pradesh, with rituals conducted by a battery of priests from the famous Tirumala temple.

The grandeur of the wedding was such that huge sets replicating Vijaya Vitthala temple of Hampi, the seat of the glorious erstwhile Vijayanagara empire, and Tirumala Tirupati temple were erected at the venue, along with the replica of the homes of both of bride and the groom.

Reddy, who had served as a minister in the BJP government, is out on bail after serving three years term in an illegal mining case.

Pre-wedding events were also conducted with equal extravagance at the venue for five days.

Artistes and dancers from different parts of the country, including Samba dancers from Brazil, were part of one such bash.

The first glimpse of the ostentatious wedding came with the invitation box with a LCD screen playing a video, where Reddy and family were seen inviting guests, lip syncing to a song.

It was reported that about 50,000 people had been invited for the wedding and people were also ferried from Reddy's bastion, mine-rich Ballari.

Reddy and family had dressed up as "royals" in gold and diamond had left no stone unturned for the wedding.

Most utensils for the wedding rituals were either gold or silver and entire venue was equipped with air conditioners.

While overflowing fountains added to the glitter, orchids and other ornamental flowers were arranged fancily. The who's who of the Kannada and Telugu film industry attended the wedding ceremony and wished the newly wed.

Reddy, who had served as a minister in the BJP government, is out on bail after serving three years term in an illegal mining case.