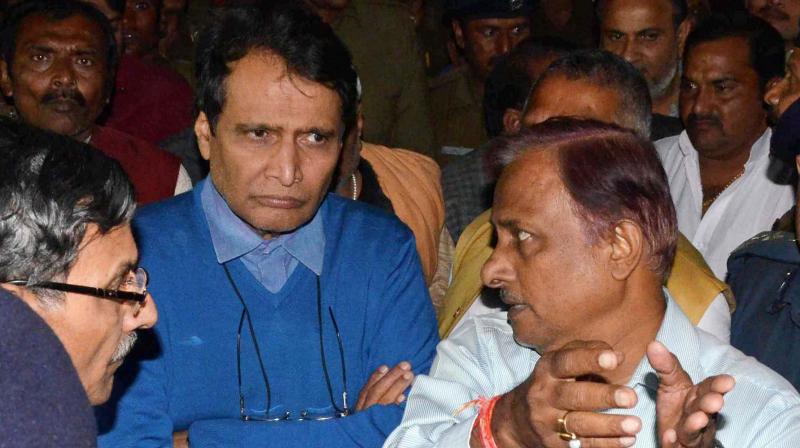 New Delhi: Promising "strictest possible action" against the guilty, government on Monday announced a thorough investigation aided by latest technical and forensic analysis into Sunday's train accident near Kanpur in which the death toll has mounted to 145.

Making a suo moto statement in the Lok Sabha amid noisy protests by the opposition over demonetisation, Railway Minister Suresh Prabhu said the exercise, which was announced in the last rail budget, to replace old coaches lacking crash-worthy features will also be expedited.

A statutory inquiry by the Commissioner of Railway Safety has also been ordered to find the correct cause of the accident, he said.

"There shall be separate comprehensive investigation aided by latest technical and forensic analysis by an appropriate agency to look into all possible angles. Strictest possible action would be taken against the guilty," he said expressing profound grief over the tragedy.

Till now, 145 passengers have lost their lives. Prabhu also gave details of the relief and rescue operation launched by the railways. He along with Railway Board Chairman visited the spot and interacted with the injured. Several other top officials including his junior Manoj Sinha, also visited the site.

An enhanced ex-gratia of Rs 3.5 lakh to the next of kin of the deceased, Rs 50,000 to the grievously injured and Rs 25,000 to those with simple injuries and Prime Minister Narendra Modi has also announced an additional amount of Rs 2 lakh and Rs 50000 for the kin of the killed and those injured, he said.

Old-technology coaches in operation lack the crash-worthy characteristics of modern coaches, Prabhu said. "I had informed this House during the previous Railway Budget that such coaches will be progressively replaced and phased out. This will be expedited," he said.