While some managed to know the fate of their kin, for many others it has been a painstaking effort filled with apprehension. 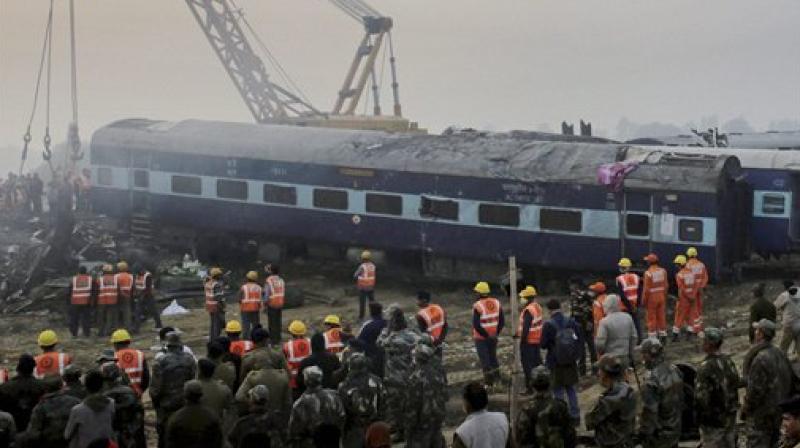 Rescue workers wrapped up the efforts to pull out the trapped passengers from the mangled bogies after an overnight operation under the floodlights including using cold cutters to open up the compartments. (Photo: AP)

Pukhrayan: Distraught relatives of people onboard the ill-fated Indore-Patna Express who have still not been united with their family, searched frantically for their loved ones on Monday, a day after the worst rail accident in recent years jolted them unaware.

While some managed to know the fate of their kin, whether they survived or were killed in the derailment of the train 19321 in the wee hours in Kanpur-Rural, for many others it has been a painstaking effort filled with apprehension.

"Whoever I have found is dead, my brother, my older sister-in-law, daughter. I haven't found my mother yet. I fear I will find her in same condition," said Nirmal Verma, who had earlier planned to travel with his family for a wedding, but did not get leave from work and was supposed to join them later.

"I am looking for my brother. Who knows? He may have changed his seat, we have searched everywhere" said Ramanand Tiwari.

One of the survivors said, "Don't have any news about my brother. We have searched all the hospitals. I fear that he is trapped."

Rescue workers wrapped up the efforts to pull out the trapped passengers from the mangled bogies after an overnight operation under the floodlights including using cold cutters to open up the compartments.

Bodies from among the 143 dead have been sent to Bihar, Madhya Pradesh and UP while the over 200 injured have been admitted to various hospitals in Kanpur-Rural. Some of them are yet to unite with their family members.

A man, whose two sisters were on the train, left from his hometown on Sunday soon after the news of the tragedy to reach the accident site, only to find one of them dead and the other missing.

"No one has any information about her (the second sister)," he said, after having spent the night frantically looking for his sister in the hospitals and asking officials around.

While one recounted how the derailment "sounded like beating of drums", another just recalled a "loud bang" just after 0300 hours when most of the passengers were jolted out of their sleep.

"We saw that bogies were on top of one another," said a man, who sustained minor injuries.

Another said, "We somehow survived as the bogie ahead of us reduced the damage. Two bogies had turned turtle, we cannot say how that happened."

For yet another survivor, the ordeal was more of a "nightmare" as he waited for hours among dead bodies in his mangled coach to be pulled out by the rescue workers who cut open the bogie.

"I could not believe it was really happening. I was the only one alive in the coach," he said, fighting back tears.