After Mulayam's no, RLD, JD-U and BS-4 form alliance in UP 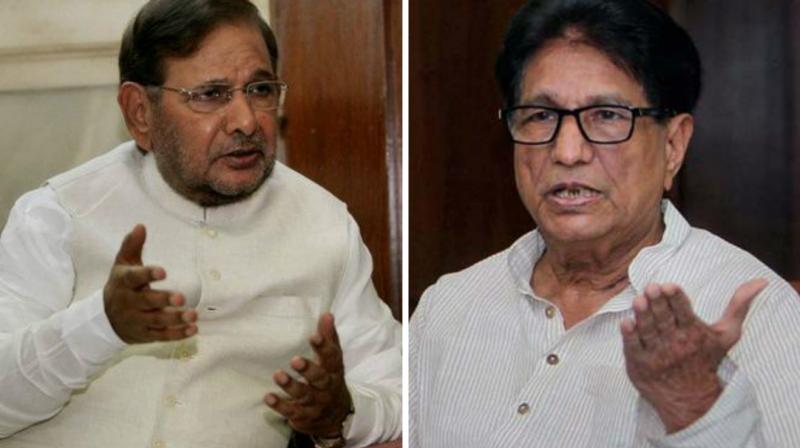 Lucknow: Rashtriya Lok Dal, Janata Dal (U) and a local outfit BS-4 on Monday announced their alliance for the Uttar Pradesh Assembly polls, a move which comes after SP supremo Mulayam Singh Yadav ruled out entering into any alliance.

RLD chief Ajit Singh, JD(U) leader Sharad Yadav and BS-4 leader Bachan Singh Yadav held a joint press conference in Lucknow to announce their alliance which will contest on all the 403 Assembly seats.

"There is no name of this alliance as of now but it will be an honest alliance. Though this is an alliance of three parties, talks are on with other smaller outfits," they said.

Attacking Mulayam, Ajit Singh said during Bihar Assembly polls all 'Lohia wadi' and 'Charan Singh wadi' parties had agreed for an "alliance with SP" but then SP declined.

"Now when alliance talks were on with SP, Mulayam talked about merger," he said, wondering, "Why Mulayam does not want any alliance against communal forces."

JD(U) leader Sharad Yadav said they were trying for unity for a long time and "Mulayam was projected as a leader but it did not materialise."

"I would have merged my party with SP on Mulayam's call but no time is left for this," he said.

The SP supremo had recently ruled out any alliance for the UP Assembly polls, but had said mergers with his party could be considered.

"At that time, it appeared that alliance talks have started but nothing came out of it," he said.

Appealing to the people of the state to support the new alliance, the JD-U leader said it wanted to take the politics of the state on the right track and people should "support" it.

JD(U) General Secretary KC Tyagi said at the time of grand alliance (formed during Bihar polls) leaders had accepted everything what Mulayam said but even after that he left it.

Asked about possibility of Congress joining the alliance, Ajit Singh said, "No talks have been initiated with Congress in this regard."