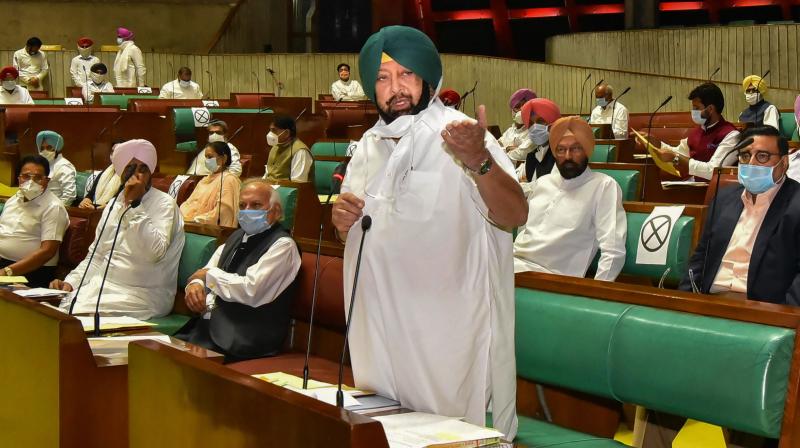 New Delhi: Congress-ruled Punjab on Tuesday became the first state to reject the three Central farm laws, with the state Assembly passing a resolution to virtually “negate” the effects of the legislation.

The move comes after widespread protests against the laws and a directive from Congress president Sonia Gandhi to all states ruled by the party to pass separate laws negating the effect of the Central farm laws.

The resolution was passed by the Amarinder Singh government at a special Assembly session, that was supported by the Opposition parties, including the Akali Dal, Aam Aadmi Party and Lok Insaaf Party. The two BJP MLAs were absent from the House.

Akali Dal, an alliance partner of the BJP, had quit the NDA over the contentious laws and its representative Harsimrat Kaur Badal had quit the Union Cabinet over it.

The laws passed by the state provide for imprisonment of not less than three years for the sale or purchase of wheat or paddy below the minimum support price (MSP), exemption to farmers from attachment of land up to 2.5 acres and prevention of hoarding and blackmarketing of agricultural produce.

Punjab finance minister Manpreet Badal told the media that initially the government had thought of making the exemption to five acres but then had limited it to 2.5 acres, thinking of the bankability of farmers.

Moving the resolution and three of the four bills, the chief minister said if the Central laws were not repealed, it would lead to anger among the state’s youth, recalling the militancy in the 1980s and 1990s. “I am not afraid of resigning. I am not afraid of my government being dismissed. But I will not let farmers suffer or be ruined,” he said.

Badal said the governor had been very positive about the state bills when some state Cabinet members, including the CM, had met him.

The laws enacted at the Centre were meant to deregulate the sale of crops and open up new markets for farmers, but they had triggered farmers’ protests, particularly in Punjab and Haryana.

The Opposition and farmers’ unions claim that the new laws will lead to the dismantling of the MSP system, a suggestion repeatedly denied by the BJP-led government at the Centre.

Punjab’s counter bills add new clauses and amend provisions in the three Central laws, with the state government arguing that this will “shield” its farmers from their impact.

The Farmers’ Produce Trade and Commerce (Promotion and Facilitation) (Special Provisions and Punjab Amendment) Bill 2020 too seeks to amend sections in the Central law to ensure that wheat or paddy is not bought for less than the MSP.