On October 2 central government has announced the ban of single-use plastic. 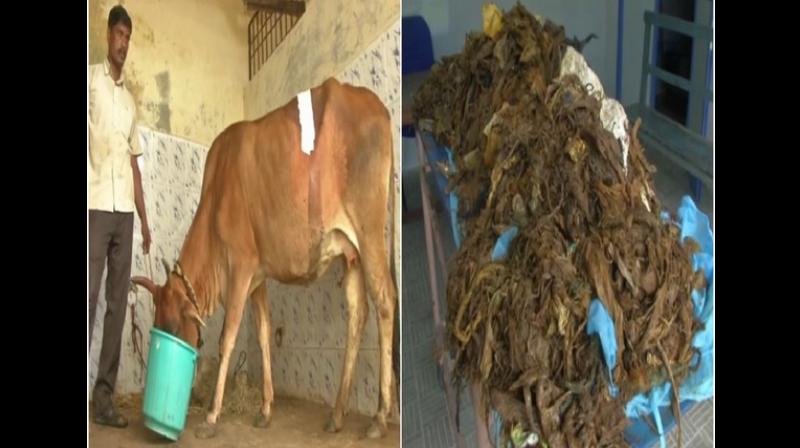 Chennai: A team of veterinarians removed 52 kilograms of plastic waste from inside the stomach of a cow through a surgery that lasted over five hours in Vepery, Chennai.

Surgeons from Tamil Nadu Veterinary and Animal Sciences University (TANUVAS) operated on the bovine to remove the plastic which was ingested by the bovine over a period of two years probably while foraging for food.

Apart from plastic waste, surgeons also found a coin, a screw and two nails from inside the cow, which had delivered some 20 days ago.

Its owner said he had purchased the cow when it was around six months pregnant and although it delivered a calf 20 days ago, it was having problems in passing dung and urine. The cow also had difficulties yielding milk and frequently kicked its stomach with its legs, according to its owner.

After observing the problem, the owner took the cow to a local veterinarian who advised him to take it to TANUVAS.

An X-Ray and Ultrasound scan revealed that plastic had occupied 75 per cent of the rumen (one of the four chambers of the cow's stomach).

Dr Velavan, Assistant Professor and Surgeon told ANI: "We gave region-specific anaesthesia instead of general anaesthesia. The rumen was completely occupied by the plastic. We removed the plastic. The problem was that the wastes were attached to the walls of the rumen, we had to be very careful that we do not damage the wall."

"After the surgery, the rumen was filled with 5 kg of bran, jaggery and pro-biotic bolus which will help in the fast recovery," Dr Velavan added.

Dr S Balasubramanian Director of clinic, TANUVAS, said: "The surgery was performed on October 18. The amount of material undigested was huge at around 52 kg. The surgery began at 11 am and ended at 4:30 pm. The surgery normally takes two hours but the problem they faced was these materials probably have been inside for around two years and were attached to the walls of the rumen. It was a challenging surgery for the surgeons."

The cow is currently undergoing treatment.

On October 2 central government has announced the ban of single-use plastic.