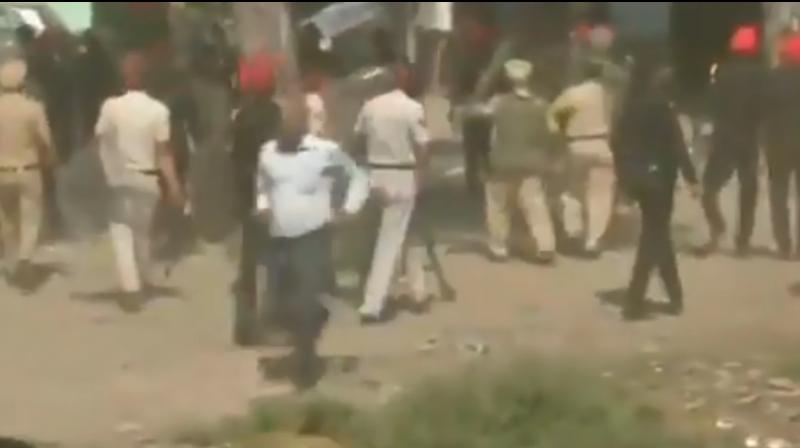 A Punjab police commando and a photojournalist were injured as the protestors, who were staging a sit-in at the site, started pelting stones and indulged in brick-batting. (Photo: ANI screengrab)

Amritsar: Protesters clashed with security personnel and pelted them with stones at the Amritsar train accident site after they were removed from the railway tracks, police officials said.

A Punjab police commando and a photojournalist were injured as the protestors, who were staging a sit-in at the site, started pelting stones and indulged in brick-batting, they said.

The situation is tense at and around the site and a huge police deployment has been made to maintain law and order, they said.

Officials said that personnel from the Punjab Police and Rapid Action Force have been deployed alongside the state police commandos.

The clash started minutes after the security forces removed the protestors, numbering in hundreds, from the track to clear it for traffic, the officials said.

Local residents have been protesting at the site and blocking the railway track since Friday evening when 61 Dussehra revellers were mowed down by a speeding train.

Police are also making announcement on loudspeakers asking people to remain inside their houses.

#WATCH Amritsar: Protesters being chased away by police at Joda Phatak after they pelted stones on them when they (police) asked them to clear the railway tracks where they were sitting in protest against #AmritsarTrainAccident. #Punjab pic.twitter.com/tAPkOB5fc2