Most people who were mowed down by the speeding train were migrant workers from Uttar Pradesh and Bihar. 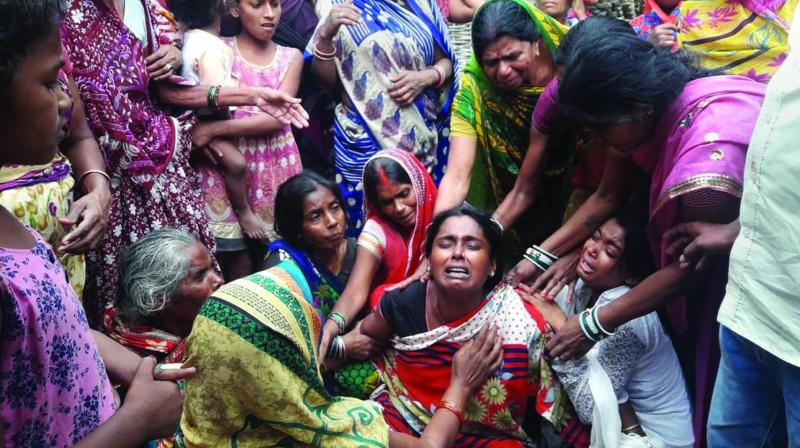 Relatives of victims of a train accident in Amritsar mourn in Gopalganj, Bihar. (Photo: PTI)

Amritsar: A burning effigy of Ravana, firecrackers and festive euphoria made people oblivious to the approaching train and in a matter of seconds, bodies were left strewn on the railway tracks, according to eyewitnesses of the tragic incident here.

At least 62 people were killed Friday evening after a crowd of Dussehra revellers that had spilled onto railway tracks while watching the burning of the Ravana effigy was run over by a train near Joda Phatak here.

“I was watching the burning of effigy of Ravana and suddenly I heard massive sound. After a few seconds, bodies of women, children and men were lying on the railway tracks. The moment was very devastating,” Jaspreet, an eyewitness who was at the site, told PTI.

Another local, Gurpreet, said: “We all were busy watching the Dussehra celebrations. Huge voice of firecrackers drowned the sound of the arriving train and we could not understand for a few seconds what had happened.”

The train was coming from Jalandhar when the accident occurred at Joda Phatak near Amritsar, where at least 300 people were watching “Ravana dahan” at a ground adjacent to the tracks.

Punjab chief minister Amarinder Singh Saturday ordered a magisterial inquiry into the accident after visiting the injured and the kin of those killed in the tragedy.

He also set a four-week deadline for completion of inquiry into the tragic train acciden, while urging all political parties to rise above petty politicking to join hands to mitigate the sufferings of the victims and their families.

The chief minister also reviewed the situation on the ground and met the injured in hospitals, besides visiting the spot where the tragedy had occurred on Friday during Dussehra celebrations.

Suraj Prakash, another eyewitness, said that a few minutes before the Jalamdhar-Amritsar train mowed down several people, another train going to Howarh from Amritsar passed through on another track, but it did not hurt anyone.

“How can it be possible that a train which passed through the area a few moments back, did not cause any casualty, but another train killed several innocent people.

“It was the mistake of train driver (Jalandhar to Amritsar). After the train passed, screams of people could be heard from everywhere,” he said.

Most people who were mowed down by the speeding train were migrant workers from Uttar Pradesh and Bihar.

A senior official in the district administration said most migrant workers from Uttar Pradesh and Bihar work in an industrial area at a stone’s throw away from the accident site and live nearby.