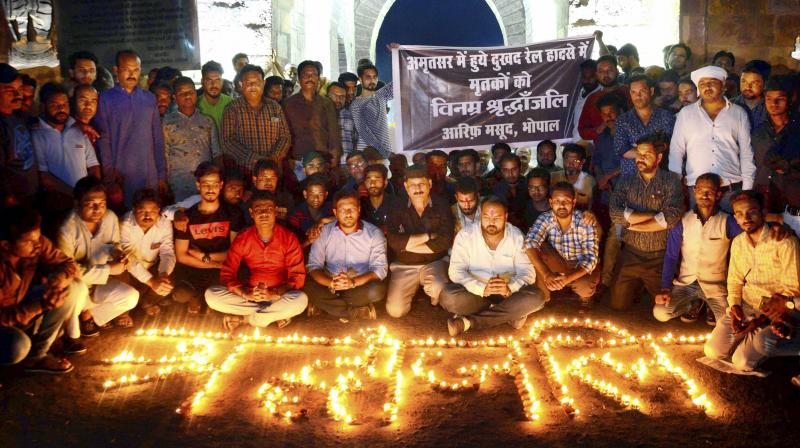 The accident happened when a crowd of Dussehra revellers spilled onto the railway tracks near Joda Phatak and could not see the train approaching them. (Photo: PTI)

Amritsar: As a blame game played out over the Dussehra tragedy in Amritsar, the police admitted they gave the organisers a no-objection certificate but said the event where a train mowed down at least 61 revellers also needed permission from the municipal corporation.

A leaked letter indicated that the organisers – the family of a local Congress councillor – had also sought security arrangements at the venue where Punjab minister Navjot Sidhu and his ex-MLA wife Navjot Kaur Sidhu were expected.

But eyewitnesses complained the arrangements for the safety of people at the ground along the tracks near Joda Phatak were not adequate. "Why did the government not ensure proper security arrangements? Why was such a function allowed to take place near the railway tracks?" asked Sujit Singh.

Railway officials said no permission was sought from them either and ruled out any inquiry by the department into what they said was the worst accident due to “trespass” on railway tracks.

The Government Railway Police (GRP) registered an FIR against “unknown persons” and Chief Minister Amarinder Singh announced a magisterial inquiry, which will submit its report within four weeks.

Amritsar Deputy Commissioner of Police Amrik Singh Powar said the organisers were given a ‘no objection certificate' on the condition that they also get permission from the municipal corporation and the pollution department.

Municipal corporation councillor Vijay Madan and her son Sourabh Madan Mithu, the main organisers of the Dussehra celebration, have gone underground with other family members.

According to police, a few people angry over the accident attacked their residence, broke window panes and pelted stones on Saturday. Following this, the Madan family members have gone to an undisclosed location and also switched off their mobile phones.

However, police personnel have been deployed at the residence.

Vijay Madan is the sitting councillor from ward number 29 falling under the Amritsar East assembly constituency. The Madan family members were the main organisers of the Dussehra event where the train accident took place.

The accident happened when a crowd of Dussehra revellers spilled onto the railway tracks near Joda Phatak and could not see the train approaching them. They were crushed under the wheels of the train coming from Jalandhar and heading towards Amritsar station.

The Indian Railways has said it was not informed by the organisers or the local administration that a Dussehra event was being organised close to railway tracks.