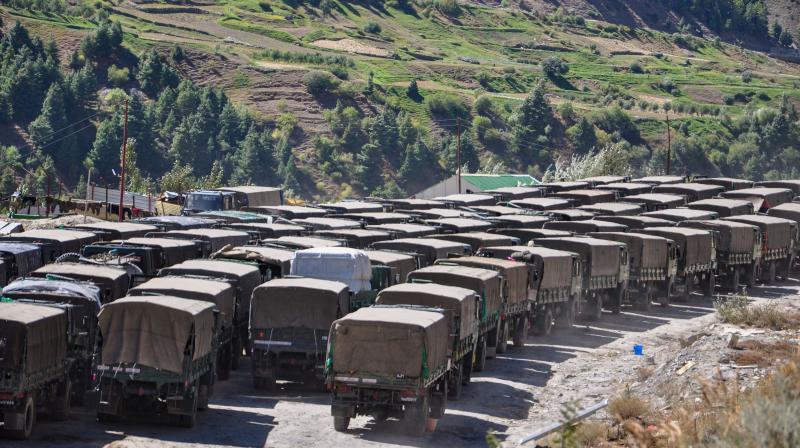 An army convoy carrying military material on its way to Ladakh amid border tension with China, at Manali-Leh highway. — PTI photo

The sixth round of Corps Commander-level talks between India and China will  take place on Monday morning at Moldo on the Chinese side along the Line of Actual control (LAC) in the Eastern Ladakh.

For the first time joint secretary (East Asia) from ministry of external affairs Naveen Srivastava will be present during the Corps Commanders meeting. A senior official from Army Headquarters will attend the meeting.

Also major generals operating in Ladakh will also be present during the Corps Commanders meeting.

The foreign affairs ministers from two sides during their meeting in Moscow had agreed for another round of Corps Commanders level meeting to bring down tension between the two armies.

During the meeting India will press for disengagement and return of status-quo of April 2020 at the Eastern Ladakh. China could push India to vacate the strategic heights it occupied on the Kailash range which overlook entry points of the Spanggur gap in the Chushul sector during the pre-emptive action on August 29-31.

The last and fifth Corps Commanders meeting was held on August 2 at Moldo.

A Major General level meeting was also held on August 8 at Daulat Beg Oldie (DBO) to discuss disengagement at the strategic Depsang plains.

However, things have changed since the last Corps Commanders meeting with at least three instances of firing reported at the LAC for the first time in 45 years.

Out of these firing incidents, two happened at the Southern banks of Pangong Tso and one in the finger area on its northern banks. Indian army has officially acknowledged only one firing incident which took place on 07 September at Mukhpari in the Chushul sector.

The situation in Ladakh is still tense and the army is on a high alert.