Buzz in the political circle is that the BJP and JD (U) are likely to contest on an equal number of seats in Bihar. 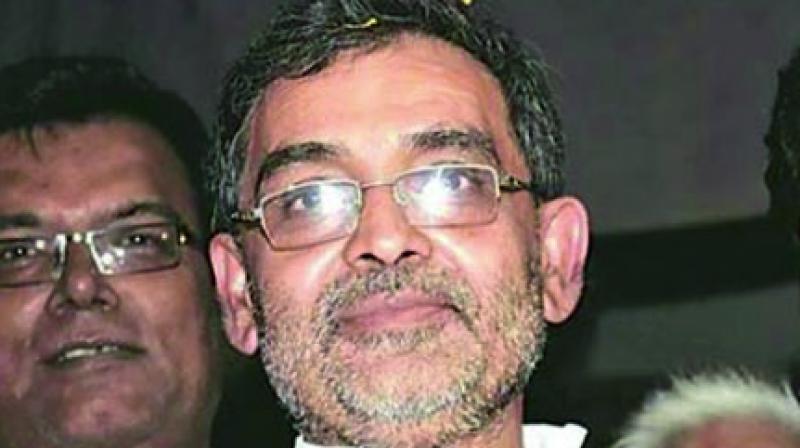 Patna: RLSP chief Upendra Kushwaha is rumoured to have started feeling uncomfortable ever since JD(U) claimed that “honourable seat sharing agreement” has been reached with the BJP.

Sources say that Mr Kushwaha is reportedly upset with the BJP for not consulting him on seat sharing for the 2019 general elections. Some of the leaders even went to an extent by saying that “ignoring Upendra Kushwaha will prove fatal for the NDA in Bihar”.

Bihar chief minister Nitish Kumar’s closed-door meeting with BJP president Amit Shah in New Delhi on Wednesday has also made the RLSP leadership uncomfortable. Sources said both the leaders met to discuss seat-sharing arrangements between the two NDA partners for the 2019 general elections.

“Seat sharing arrangements can’t be done without consulting other coalition partners of the NDA. Our party has no information regarding any such developments. We will wait for the BJP to discuss the issue with all partners,” Senior RLSP leader Jitendra Nath told this newspaper.

Buzz in the political circle is that the BJP and JD (U) are likely to contest on an equal number of seats in Bihar. After the state executive meeting on Sunday, JD(U) leader RCP Singh had claimed that discussions with BJP over seat sharing were in final stages and an official announcement will be made soon.

Reports suggest that CM Nitish Kumar during the meeting had announced that JD(U) will be getting an “honourable number of seats” for the 2019 general elections.

Amid growing uneasiness between the JD(U) and RLSP over seat sharing issues, the Mahagathbandhan has once again started wooing Mr Kushwaha.

According to sources, RJD leader Tejashwi Yadav may extend fresh invitations to RLSP chief Upendra Kushwaha who is considered a powerful Koeri leader, the largest OBC caste group after the Yadavs in Bihar. Koeris form around 10 per cent of voters in the state. With Muslims (15 per cent) and Yadavs (14 per cent) already on its side, the RJD feels that Mr Kushwaha’s entry in Mahagathbandhan may cause a massive dent to JD (U)’s voter base in Bihar.

Senior RLSP leader Jitendra Nath however, downplayed the speculation and said that “the political scenario in Bihar has changed and our party’s support base has increased in last fifteen years. Ignoring Mr Kushwaha is not easy for political parties in Bihar. But right now we are waiting for the BJP to call our party for discussions. Any speculations regarding RLSP holding talks with Mahagathbandhan leaders are baseless”.