India   All India  21 Sep 2018  Fliers bleed due to snag on Jet Airways flight
India, All India

Fliers bleed due to snag on Jet Airways flight

After the nightmare, some passengers likened the crew to “trainees” who did not know how to deal with the situation. 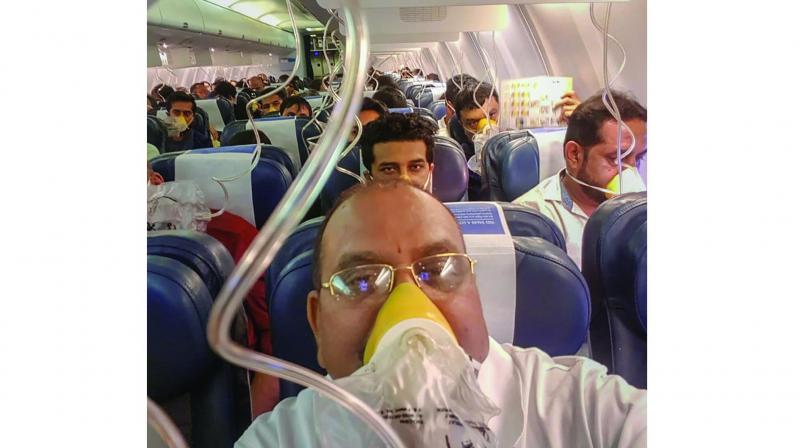 Mumbai: A Mumbai-Jaipur Jet Airways flight had to turn back within 23 minutes of take off on Thursday as at least 30 passengers suffered nose and ear bleeding, allegedly due to the failure of the cockpit crew to maintain cabin pressure.

The Boeing 737 aircraft had 166 passengers and five crew members on board.

A Jet Airways spokesperson admitted that the aircraft returned to Mumbai due to “loss of cabin pressure” and said that the pilots had been taken off duty pending investigation.

Out of the 30 passengers who suffered injuries five were taken to Dr Balabhai Nanavati Hospital in Mumbai after being diagnosed with “mild conductive deafness”. The rest underwent treatment at airport hospital.

One of the five passengers taken to Dr Balabhai Nanavati Hospital for treatment later demanded `30 lakh in compensation, besides 100 upgrade vouchers, alleging lack of proper care by the airline, sources in the airline said. Under the law, airlines are liable to pay compensation in case a passenger gets injured while travelling with them.

An official of the Aircraft Accident Investigation Bureau (AAIB), which is conducting a probe in the episode, said that the incident could be a case of negligence on the part of the pilots since controlling cabin pressure is part of checks before operating a flight.

“During climb, the crew forgot to select bleed switch due to which cabin pressurisation could not be maintained. As a result, oxygen masks got deployed,” said the AAIB official.

After the nightmare, some passengers likened the crew to “trainees” who did not know how to deal with the situation.

Ankur Kala (38), a jewellery firm worker who suffered a nosebleed, said, “About 15 to 20 minutes after takeoff, oxygen masks were deployed from the overhead compartments. But there were no instructions as to whether or not we were supposed to use them.”

“There was no announcement from the pilots or crew on whether we were going ahead or landing. The crew members panicked more than the passengers,” he said.

Darshak Hathi, an international faculty member of the Art of Living, said, “Many oxygen masks were not working.” The civil aviation ministry said it has requested the directorate general of civil aviation (DGCA) to immediately file a report on the issue.

“The crew is being derostered. Of the 166 people on board, 30 were affected and have been given treatment,” the ministry said in a tweet.

Against the backdrop of recent incidents related to the safety of air passengers, civil aviation minister Suresh Prabhu on Thursday ordered a safety audit of all scheduled airlines and airports.