PM, President say she will be remembered for developing Delhi. 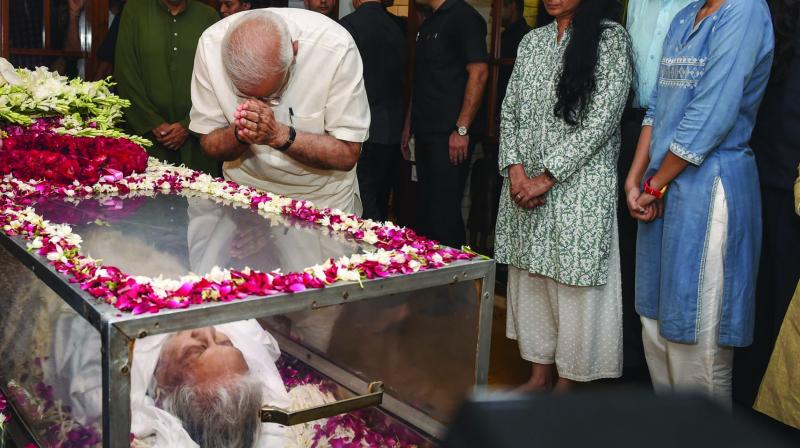 New Delhi: Condolences poured in from different corner after the demise of former Delhi chief minister Sheila Dikshit on Saturday, with President Ram Nath Kovind and Prime Minister Narendra Modi recalling her contributions to the development of the national capital. A Congress stalwart, Ms Dikshit (81) died after suffering a cardiac arrest at a private hospital in the national capital on Saturday afternoon.

Offering condolences to Ms Dikshit’s family and associates, President Mr Kovind said, “Her term in office was a period of momentous transformation for the capital for which she will be remembered.”

Vice-president M. Venkaiah Naidu hailed her as a good administrator. “I express my profound sorrow and grief over the demise of former chief minister of Delhi,” the vice-president’s secretariat said in a tweet.

In a tweet, Prime Minister Mr Modi said, “Deeply saddened by the demise of Sheila Dikshit Ji. Blessed with a warm and affable personality, she made a noteworthy contribution to Delhi’s development.”

Former Prime Minister and Ms Dikshit’s party colleague Manmohan Singh said that in her death, the country has lost a dedicated Congress leader of the masses. “People of Delhi will always remember her contribution to the development during her three tenures as Chief Minister of Delhi,” Dr Singh added.

Ms Dikshit served as Delhi’s chief minister for 15 years from 1998-2013. Congress leaders Rahul Gandhi and Priyanka Gandhi Vadra also condoled her demise. “I am devastated to hear about the passing away of Sheila Dikshit Ji, a beloved daughter of the Congress Party, with whom I shared a close personal bond. My condolences to her family & the citizens of Delhi, whom she served selflessly as a three-term chief minister, in this time of great grief,” Rahul Gandhi tweeted.

Ms Priyanka, who was in Uttar Pradesh, told reporters in Varanasi, “She was a tall leader of the Congress. Her contributions to the party, to the politics of the entire nation, especially Delhi, will always be remembered.” Later she tweeted, “Sheila ji will always be remembered for her years of exemplary governance and immense contribution to the development  of Delhi. I will miss her wise counsel, her sweet smile and the warmth with which she would hug me whenever we met.”

Union home minister and BJP president Amit Shah said, “I am extremely saddened at the demise of former Delhi chief minister Sheila Dikshit. I express my condolences to her families and supporters. May god give strength to her family in this hour of grief.”

Delhi chief minister Arvind Kejriwal said Ms Dikshit’s demise “is a huge loss for Delhi and her contribution will always be remembered”. Delhi BJP president Manoj Tiwari, who defeated her in 2019 polls, called her a mother figure. “Deeply pained to hear the sad and sudden demise of Sheila Dikshit Ji Ex CM Delhi.. May God bless her soul and give her eternal peace. Delhi will miss you Ma’am, u were a mother figure in my life...#RIPSheilaDikshit,” said Mr Tiwari.

Union minister Nitin Gadkari expressed grief at the death of Ms Dikshit. “Her contribution to the development of Delhi will always be remembered,” Mr Gadkari tweeted.

Senior BJP leader Prof Vijay Kumar Malhotra, who was Leader of Opposition in Ms Dikshit’s last term as CM, said its a personal loss for him and a great loss to the Delhi people as she was a icon of development in the city.

“I knew her for nearly four decades. I called her a week ago and told her she should not have contested LS polls. She told me she could not have avoided the responsibility given to her by her party. There are few politicians who are dedicated to their party to the extent she was,” Prof Malhotra added.

BJP working president J P Nadda said, “Deeply saddened by the demise of Sheila Dikshit Ji. Condolences to her family and supporters in this hour of grief. May her soul rest in peace.” Union minister Prakash Javedekar said Ms Dikshit “was respected by all the parties.”