A total of 57 animals were rescued out of which four died on arrival at the Centre for Wildlife Rehabilitation and Conservation (CWRC). 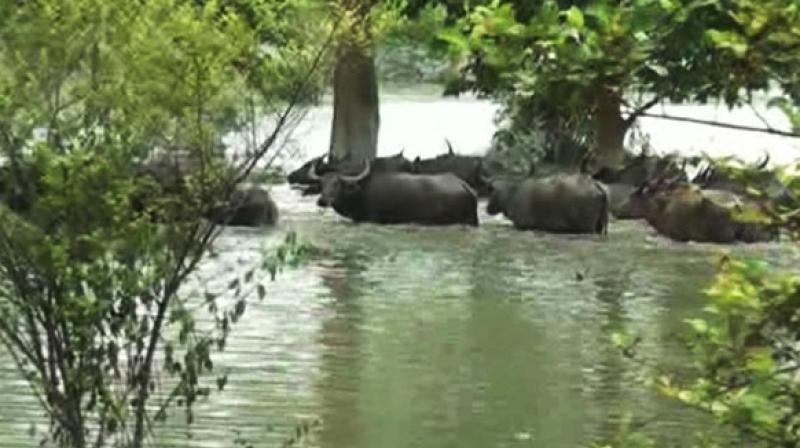 Morigaon: A large section of Pobitora Wildlife Sanctuary here has been inundated, as incessant rains continue to lash the northeastern state.

With their home partially submerged, rhinoceroses and wild buffaloes were seen making their way to higher regions in the sanctuary in order to take refuge.

Nestled in the grasslands of Assam, Pobitora Wildlife Sanctuary is home to the Greater Indian One-Horned Rhinoceroses and houses its highest population in the whole world.

It is also home to the fresh eater Dolphins or South Asian River Dolphins, which are primarily found in the rivers of Ganga and Brahmaputra in India, as well as the Oriental Pied Hornbill, among other mammals.

Earlier this week, over 50 animals, including five rhinos, died in Kaziranga National Park in the midst of floods in the state.

According to a report of the divisional forest department on Wednesday, an elephant, several wild boars, hog deer and sambars, besides the rhinos, were found dead in the park.

A total of 57 animals were rescued out of which four died on arrival at the Centre for Wildlife Rehabilitation and Conservation (CWRC).

According to the State Disaster Management Authority, as many as 50 people have lost their lives in Assam due to incessant rains and related incidents.