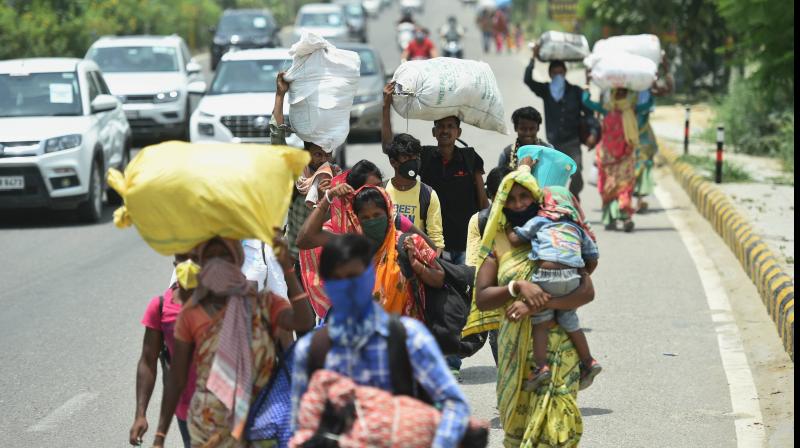 New Delhi: The Prime Minister on Saturday launched the Garib Kalyan Rozgar Abhiyan which entails work for 125 days for skilled migrant (guest) workers, who lost their jobs during the coronavirus pandemic and were forced to return to their native places.

The scheme, which was launched in six states namely Uttar Pradesh, Bihar, Madhya Pradesh, Rajasthan, Jharkhand and Odisha (from where a majority of guest workers belong to) through video conferencing, will involve completion of projects in villages worth Rs 50,000 crore in mission mode in 116 districts of these six states under the aforementioned in 125 days.

However, the Centre is yet to clarify whether these skilled workers will be paid for the works to be done by them as per the Minimum Wages Act or the wages paid under the MGNREGA provisions.

Mr Narendra Modi, while launching the new scheme, announced that an amount of Rs 50,000 crores would be spent for building durable rural infrastructure under it.

The scheme is being seen as an afterthought by the government, after it has received a lot of criticism for not facilitating transport for the lakhs of guest workers on time, who were forced to walk thousands of kilometres to reach their native places, after they were rendered jobless and stranded in big cities owing to the sudden announcement of the lockdown on March 24.

Mr Modi further said that 25 work areas have been identified for employment in villages, for development of various works. These 25 works or projects are related to meet the needs of the villages like rural housing for the poor, plantations, provision of drinking water through Jal Jeevan mission, panchayat bhavans, community toilets, rural mandis, and rural roads, among other things.

He added that the Abhiyan shall also provide modern facilities in rural areas. He added it is of great necessity that high speed and cheap internet be provided in every rural household to help the youth and children.

The Prime Minister said it is the first time that the rural areas are using more internet than the urban areas. Hence the laying of fibre cable and provision of internet are also made a part of the Abhiyan.