Most of the children who have died due to AES belong to the marginalised sections. 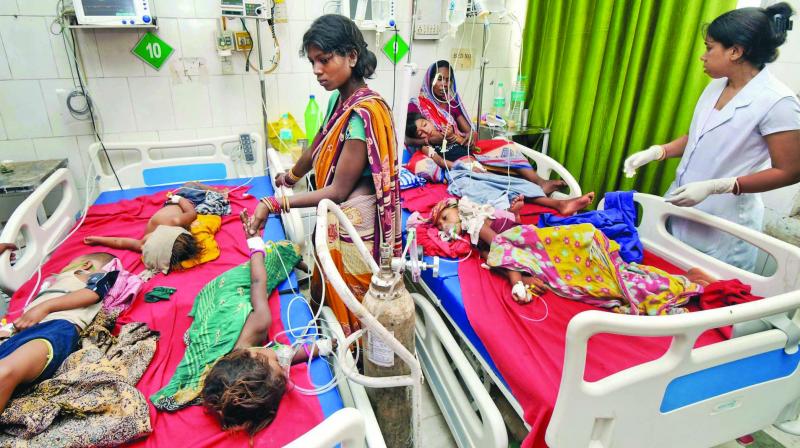 Patna: Acute Encephalitis Syndrome (AES) continues to pose a tough challenge for the Bihar government. In the last three weeks, more than 160 children have died in the state due to the killer disease.

According to officials, in Muzaffarpur alone  encephalitis has taken the lives of around 110 children.

The rising cases of encephalitis and brain fever have raised questions on negligence and unpreparedness by doctors and government officials to tackle the situation.

On Tuesday, when chief minister Nitish Kumar visited Muzaffarpur to review the condition of patients he had to face protests by angry people amid sloganeering outside Sri Krishna Medical College and Hospital (SKMCH), where most of the children have died since the outbreak of AES and brain fever.

Facing criticism over inadequate infrastructure, like beds, and lack of medical professionals in SKMCH, the district administration has converted the prisoner’s ward into a makeshift pediatric ICU.

Over 402 children are currently being treated at four ICUs at SKMCH.

Health officials from Muzaffarpur said, “Fresh cases with AES symptoms have been arriving for treatment almost every day since the outbreak of the epidemic. There is a shortage of beds but the hospital management is trying to cope with the outbreak with whatever infrastructure is available here”.

On Sunday, Union health minister Harsh Vardhan had visited Muzaffarpur to take stock of the situation and stressed the need for “in-depth research” to find the reasons behind the outbreak of an epidemic.

“The situation is shocking. The government is taking all necessary steps to prevent the disease and save children from losing their lives. We also need to develop well-equipped research labs in at least five districts in order to find ways to detect and prevent the disease,” Mr Vardhan said after he visited Muzaffarpur and announced that a team from AIIMS will be rushed to the state.

Earlier this week, the National Human Rights Commission (NHRC) sent notices to the Central and state governments over reports of rising mortality rate due to AES in Muzaffarpur and other districts.

State government officials, however, maintained that all necessary steps have been taken to tackle the crisis. Speaking about the issue, chief ecretary Deepak Kumar said, “The state government is doing everything possible to tackle the crisis. Medical teams have been sent from other hospitals of the state to assist doctors at the SKMCH. Officials have also been asked to bear the transportation and medical expenses of patients suffering from AES.”

Experts claim that encephalitis is a vector-borne disease which causes inflammation in the brain and its symptoms are convulsions, fever, and headache. It occurs mostly in summer and in north Bihar, the disease is locally known as “Chamki Bukhar” or “Brain fever”.

According to a report, the symptoms of encephalitis which has affected the lives of more than 300 children in North Bihar could be linked to a toxin which is mostly found in litchi fruit.

Muzaffarpur is the largest producer of litchi in the country and most of the cases have been reported from the district.

The outbreak of the disease has been hitting the region every year since 1995, usually during the litchi season. Muzaffarpur is the largest Litchi producing region in the country.

Sources said that most of the children who were admitted to hospitals with AES symptoms and lost their lives belonged to marginalised sections.

After his visit to Muzaffarpur the chief minister directed officials to constitute a team of experts to study the socio-economic condition of blocks and villages where a maximum number of AES cases was detected.

He had earlier announced an ex gratia of `4 Lakh each to the families of the children who died due to disease.

“A team will be sent to study the condition and environmental factor in the affected areas in order to find ways to tackle the surge in AES and brain fever cases,” said chief secretary Kumar.