The Kerala High Court has stayed the order to repatriate Swamy from the post of chairman of the board. 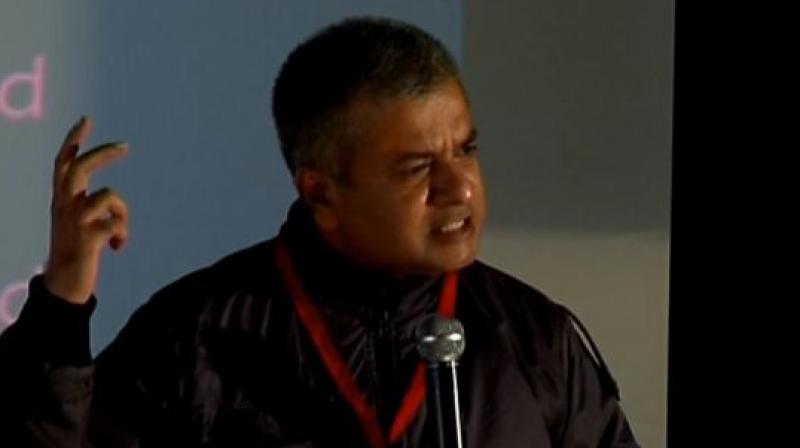 The additional chief secretary rank official still has 10 more years to retire. The Kerala government has not officially reacted to the media reports. (Photo: Youtube/TedX)

Kochi: A Kerala cadre IAS officer, known for his staunch stand against corruption, Friday said he would fight legally against the reported move of the state government to terminate him from the service.

Raju Narayana Swamy, a civil service examination topper of the 1991 batch, was reacting to reports in a section of the media that the government has recommended to the Centre to terminate him from the service.

The additional chief secretary rank official still has 10 more years to retire. The Kerala government has not officially reacted to the media reports.

The reported move by the government came at a time when he was engaged in a legal battle against the central government's decision to repatriate him from the post of chairman of Coconut Development Board to his parent cadre, the government of Kerala.

The Kerala High Court has stayed the order to repatriate Swamy from the post of chairman of the board.

"I have no official information about the decision to terminate me from the service. I came to know about it from media reports. (If it is true), it is very sad. I am pained," Swamy told reporters here.

The officer said the reported decision to terminate him from service was taken without prior notice.

According to the reports, the state government gave the recommendation to the central government on the ground that Swamy has not come back to the parent cadre three months after he was repatriated from the service.

The reports said the government recommended action against Swamy for his unauthorised absence from office and failure in intimating the government about his whereabouts after completing tenure as the chairman of Coconut Development Board.

Swamy rejected the charges and said he had sent a letter to the state government intimating about his repatriation to the state cadre from the central service.

He said he has challenged the repatriation decision before the Central Administrative Tribunal (CAT) and it was pending before it.

"I was shifted from the post of CDB chairman, seven months after taking the charge. I have challenged the decision in the Central Administrative Tribunal (CAT)," he said.

Swamy said when his lawyer sought a clarification from the principal bench of the CAT on what step has to be taken next, it had said if he rejoins the parent cadre, the case would become infructuous and that would invite contempt of court.

That is the reason why he did not go back to the parent cadre, Swamy said.

He said he would launch a legal battle if he is terminated from the service illegally.

Swamy alleged that his action against corruption in the Coconut Development Board would have been the reason for the move to terminate from the service.

"Had I not taken any action against the corruption in the CDB, such a decision would not have been taken," he said.

He said he had unearthed corruption when he was heading the board.

Such cases were reported from the Bengaluru and Kolkata offices of the board, he said.

Teak wood worth crores of rupees were cut illegally from the board's Mandya farm in Karnataka, he said.

"I took strong action against such actions. Finally, I got a reward," he said.

Swamy alleged that a central minister from Karnataka telephoned him asking him not to take action against the corrupt official.

Swamy was appointed the chairman of the board on deputation on July 17, 2018, for one year and he assumed charge on August 8, 2018.

He was entitled to continue at least up to August 7, 2019, even though the government was empowered to cut short the period of appointment in exceptional cases.

However, he was repatriated all on a sudden to his parent cadre.