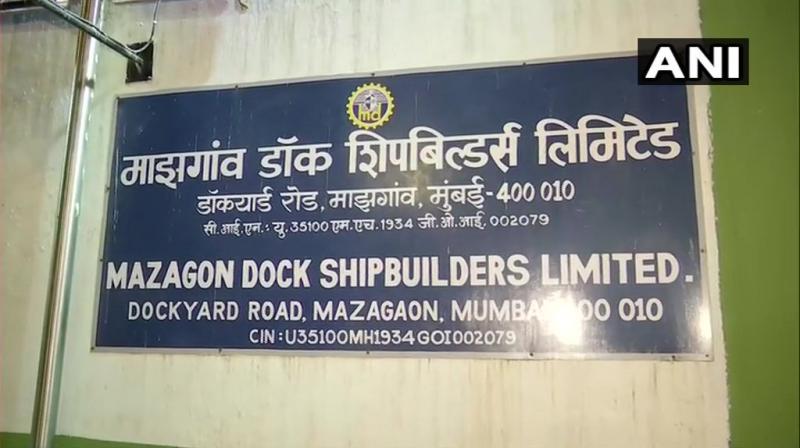 Eight fire-fighting engines, along with quick-response vehicle, have been pressed into service to extinguish the blaze. (Photo: ANI)

Mumbai: A major fire broke out at an under-construction warship of the Navy at Maharashtra's Mazgaon Dockyard here Friday evening and one person was suspected to be trapped inside, a senior city fire brigade official said.

"Under-construction warship ''Visakhapatnam'' caught fire at 5.44 pm. The blaze erupted on the second deck of the ship," said PS Rahangdale, the chief of city fire brigade.

Eight fire-fighting engines, along with quick-response vehicle, have been pressed into service to extinguish the blaze, he said.

"Fire is confined to second and third deck of the warship. Fire-fighting operation is underway along with Dockyard fire-fighters. Smoke has spread in the warship. We suspect that one person is trapped inside," Mr Rahangdale said.

"The cause of the fire will be ascertained after a proper inquiry, but the first priority is to douse the fire with a minimum loss," another fire brigade official said.

#UPDATE: One person is suspected to be trapped inside the ship. Fire is confined on the second and the third floor of the ship. Fire fighting operations underway. #Maharashtra pic.twitter.com/agsfWea4gr

Mazgaon Dockyard is the only facility in India having capability to build sub-marines. Visakhapatnam, the largest warship of its class, was unveiled for construction in Mazgaon Docks in April 2015.

It is the first of the four stealth guided missile destroyers to be built under Project 15-B Class.