India   All India  21 Jun 2018  Yoga one of most powerful unifying forces: PM Modi on Int'l Yoga Day
India, All India

Yoga one of most powerful unifying forces: PM Modi on Int'l Yoga Day

PM said world has embraced Yoga and glimpses can be seen in manner in which International Yoga Day is marked every year. 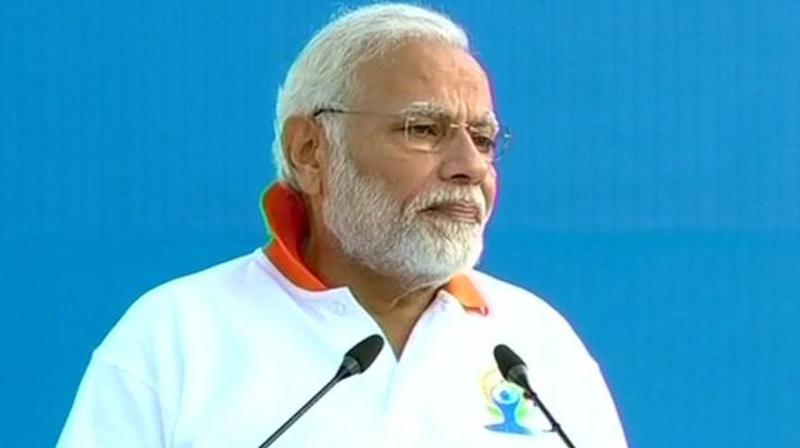 PM Modi said from Dehradun to Dublin, from Shanghai to Chicago, from Jakarta to Johannesburg, Yoga is everywhere. (Photo: ANI)

Dehradun: On the 4th International Yoga day today, Prime Minister Narendra Modi said yoga has become one of the biggest mass movements in the quest for good health and well-being as he lead an estimated 50,000 enthusiasts.

Addressing the gathering, Prime Minister Narendra Modi said, "Yoga has emerged as the biggest unifying force in the world."

The Prime Minister reached the venue a little after 6:30 am wearing a white t-shirt and a pair of white trousers. PM Modi performed breathing exercises and asanas on the lawns of the Forest Research Institute (FRI).

Addressing the gathering, the Prime Minister said from Dehradun to Dublin, from Shanghai to Chicago, from Jakarta to Johannesburg, Yoga is everywhere.

“The world has embraced Yoga and glimpses of this can be seen in the manner in which International Day of Yoga has been marked every year,” Prime Minister Narendra Modi said.

He said the way to lead a calm, creative and content life was Yoga.

“In Yoga, we have the perfect solution to the problems we face, either as individuals or in our society,” the Prime Minister said.

Prime Minister Narendra Modi said Yoga presents a ray of hope for future of the world.

“Yoga is beautiful because it is ancient yet modern, it is constant yet evolving,” he said.