India   All India  21 Jun 2018  TB infected elephants not to be used for tourist rides in Amer Fort: Rajasthan govt
India, All India

TB infected elephants not to be used for tourist rides in Amer Fort: Rajasthan govt

The move by comes after a plea from animal rights groups for the contagious elephants to be quarantined. 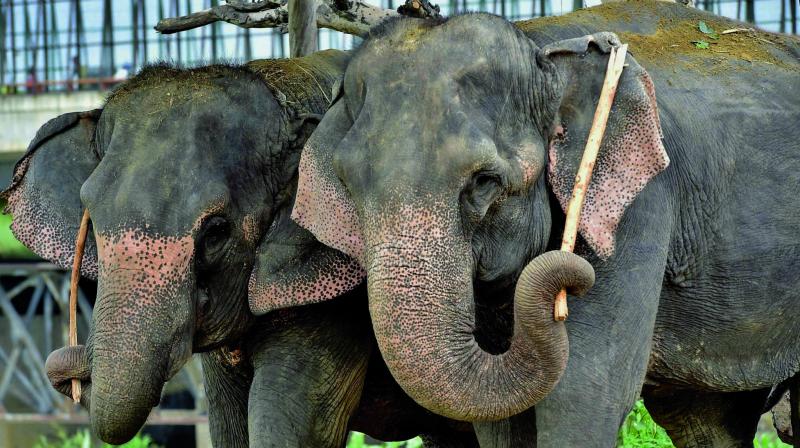 According to an examination conducted by the Animal Welfare Board of India (AWBI) at Hathi Gaon, ten elephants were found to be suffering from tuberculosis. Representative image (Photo: File/PTI)

New Delhi: The Rajasthan government on Thursday directed the Department of Archaeology and Museums to segregate, quarantine and ensure that the ten elephants found to be suffering from tuberculosis are not used as rides for Amer Fort.

The move by comes after a plea from animal rights groups including the Humane Rights Society International/India (HSI India) and People for Animals for the contagious elephants to be quarantined.

"We welcome the news of infected elephants being quarantined and not being used at rides. However, segregation is not enough," said N G Jayasimha, managing director HSI India, in a statement to PTI. He added that there need to be better living conditions for elephants so that the spread of diseases can be contained.

On June 1, a court had directed the Jaipur police department to investigate instances of cruelty against elephants used to provide joy rides at the Amer Fort and submit a report before it.

According to an examination conducted by the Animal Welfare Board of India (AWBI) during December 2017 to March 2018 at Hathi Gaon, ten elephants were found to be suffering from tuberculosis.

Animal rights activists had asked the Union Health Ministry on June 18 to quarantine elephants infected with tuberculosis in Jaipur's Amer Fort and screen all the untested animals which are "forced" to give rides to tourists, as the disease can spread from animals to humans.

The move came after the report by AWBI was released. HSI India had also urged the Director-General of Police, Rajasthan and District Magistrate, Jaipur to initiate prosecution against custodians of the infected elephants for posing a threat to the lives of other elephants, and also to every human they come in contact with - the mahouts, handlers and tourists.

"We urge the forest department to move the elephants from Haathi Gaon, where they currently reside, to a lifelong care and treatment facility and rehabilitated in a Central Zoo Authority (CZA) recognised rehabilitation centre. We also urge the police to prosecute the owners for wilfully violating the law," Jayasimha said.

HSI India is currently working with the Forest Department to rescue illegally owned elephants, and treat those affected by tuberculosis in separate areas to mitigate the health risks. It is running a campaign to end the elephant rides at Amer Fort as it is riddled with cruelty.