Couple got passport after they tweeted of ordeal to External Affairs Minister Sushma Swaraj. 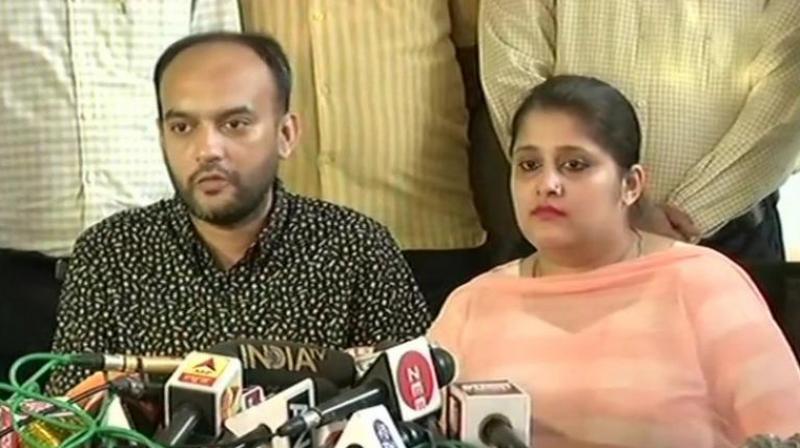 Tanvi Seth, who got married to Mohammad Anas Siddiqui, was asked to change her name and religion. (Photo: Twitter | ANI)

New Delhi: A showcause notice has been issued to the official of the regional passport office in Lucknow who harassed an inter-faith couple from Noida on Wednesday.

Promising action against the official, Regional Passport officer Peeyush Verma said, "Their passports have been issued. A showcause notice has been issued to the official who was at fault, action will also be taken. We regret the incident and will ensure it is not repeated."

The couple, from Noida, who had an inter-faith marriage, alleged on Wednesday that they had to face harassment at the regional passport office in Lucknow.

The woman was asked to change her name and religion. In a series of tweets to External Affairs Minister Sushma Swaraj, Tanvi Seth who is married to Mohammad Anas Siddiqui narrated the ordeal and asked the minister to intervene.

The couple, who needed to renew one passport and sought a new one, alleged that they were humiliated during the interview on Wednesday by the passport officer. "I was told my passport cannot be made because I have married a Muslim and did not change my name. I asked what I should do now. So I was told to change my name in all documents," Seth told NDTV.

She said the officer spoke to her "in a very humiliating manner". "A lot of people were staring at me because that officer was very loud. I was in tears," she added.

Calling it a case of "moral policing", Seth said the officer has put both their passports on hold.

@SushmaSwaraj Ma’am I never ever imagined that in a place like passport office we would have a people who are moral policing the citizens. He dint just put my passport on hold he even put my husband’s @5220manas passport on hold. This is clear grudge. I was shocked at this 1/2

@SushmaSwaraj behaviour. I have never felt so insulted in the last 12 years of my marriage with my husband. It is my personal choice to choose a name I want to after marriage. This is our family matter and last thing I expected to hear at the passport office was 2/3

@SushmaSwaraj it is your duty to change your name after marriage. The person who spoke to my husband later said if your wife’s case would have come to me there wouldn’t have been issues because her papers are complete.

Seth's husband Mohammad Anas Siddiqui said, "We have all legal documents to apply for a passport." He added that the passport officer asked him to change his name, religion and take 'pheras' as well.

Anas Siddiqui added that the officer said one of them has to change their name or religion.

The ministry has sought for a report.

Tanvi Seth and Mohammad Anas Siqqiqui got married in 2007 and have a 7-year-old daughter. Both work in Noida-based multinational firms.