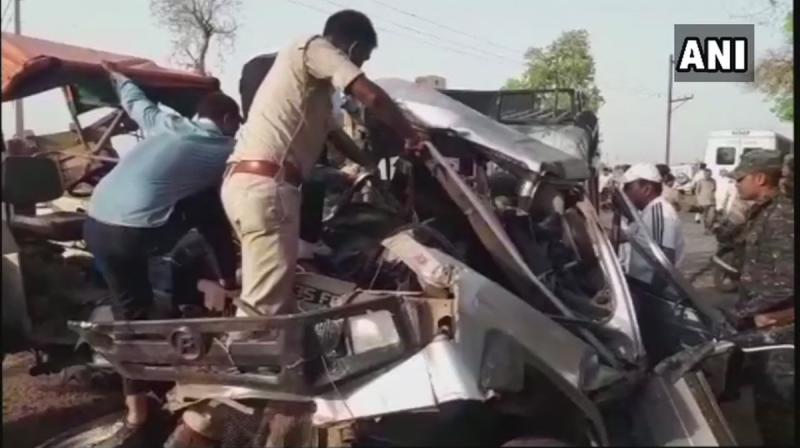 The rescue team had a tough time pulling the bodies out of the mangled jeep. (Photo: Twitter | ANI)

Morena: Fifteen members of a family on their way to attend the last rites of their relative were killed in a road accident after a tractor-trolley rammed their jeep in Madhya Pradesh early on Thursday morning.

The accident took place at around 6 am on Thursday in Morena, 456 km from capital Bhopal. Five other family members who were in the jeep have been injured and undergoing treatment. Five women are among the dead.

The sand-landed tractor-trolley hit the overloaded jeep ferrying the family of 20 from Gwalior to Morena to attend the last rites of their relative at a cross road near Ganjrampur village, Morena Superintendent of Police Amit Sanghi told PTI.

Just as the jeep took a turn in Morena's Ghurgan village, a sand-laden tractor coming from the opposite direction hit the overloaded jeep. The impact of the collision was so strong that the jeep was crushed and flipped upside down on the road. Police said twelve of the people in the jeep died on the spot.

Passers-by who saw the accident called up the police control room and informed the police. The police reached the spot and sent the injured to the district hospital in Morena.

The rescue team had a tough time pulling the bodies out of the mangled jeep.

The driver of the tractor-trolley, carrying sand mined illegally from the National Chambal Sanctuary, fled the spot after the accident, Sanghi said.

A case was registered against him, he said, adding that a probe was on into the incident.