The driver of the tractor-trolley fled the spot after the accident. 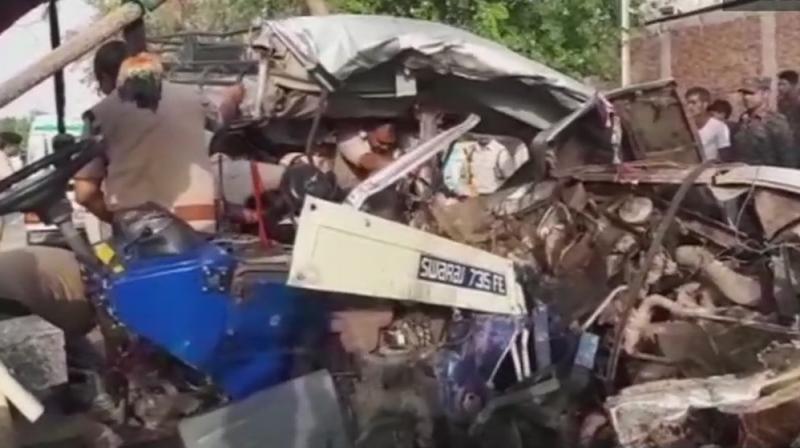 The sand-laden tractor-trolley hit the overloaded jeep carrying nearly 20 people of a family at a cross road near Ganjrampur village. (Photo: ANI/Twitter)

Morena (Madhya Pradesh): Twelve members of a family on their way to a condolence meet were killed and eight others injured when a tractor-trolley hit their jeep in the district on Thursday morning, a police official said. The death toll has now risen to 15.

The sand-laden tractor-trolley hit the overloaded jeep carrying nearly 20 people of a family around 6 am at a cross road near Ganjrampur village, Morena Superintendent of Police Amit Sanghi told PTI.

Twelve of the victims died on the spot, while eight others sustained injuries in the accident and were referred to the district hospital for treatment, he said.

The victims, all from Gwalior district, were going to Ghurgan village for a condolence meeting, he said. The driver of the tractor-trolley, carrying sand mined illegally from the National Chambal Sanctuary, fled the spot after the accident, Sanghi said.

A case was registered against him, he said, adding that a probe was on into the incident.