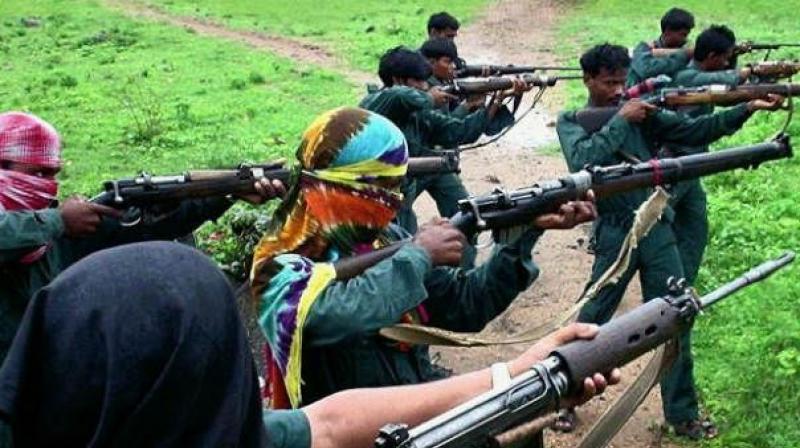 Raipur: A Maoist 'deputy commander', carrying a reward of Rs 3 lakh on his head, was arrested on Wednesday along with explosives in Chhatisgarh's insurgency-hit Bijapur district, police said.

The cadre identified as Rakesh Sodhi, 20, was apprehended from Awapalli police station area when a joint team of security forces was out on an area-domination operation, Bijapur Superintendent of Police KL Dhruv said.

The team comprising, Central Reserve Police Force's (CRPF) 229th battalion and district force, was cordoning off a road between Kottaguda and Kanwarguda villages when it spotted a suspect who was trying to escape, he said.

The suspect was held after a short chase and a tiffin bomb, two detonators and electric wire were seized from his bag, the SP said.

During interrogation, he was identified as Rakesh Sodhi, a native of Punnur village in Awapalli area, who was active as local guerrilla squad (LGS) deputy commander of Maoists in Madded area, he said.

The ultra was wanted in two Naxal-related offences, the SP said.

Police has also gunned down two women Naxals in an encounter at a forest in Chhatisgarh's Narayanpur district on Wednesday.

The skirmish took place on Wednesday morning in the forest near Hasnar village when a joint team of the Special Task Force (STF) and District Reserve Group (DRG) was out on an anti-Maoist operation, Narayanpur Superintendent of Police Santosh Singh said.

The squad had earlier launched the operation in the restive Abhujmad area, considered as a Maoist den, located around 300 kms from Raipur, he said.

When the patrolling team was cordoning off a forest patch near Hasnar, the security men spotted a Maoist camp and started encircling the area, he said.

On sensing the presence of the security personnel, the rebels started firing indiscriminately on them leading to the gunbattle, he said.

The encounter lasted for about one hour following which the ultras fled into the forest, the SP said.

Later during a search, the bodies of two women Maoists clad in 'uniform' were found at the spot.

The police also recovered two .315 bore guns, some explosives, Maoists uniforms, their literatures and several other items from the site, Singh said.

Further details are awaited as the operation is still underway in the region, he said.

Earlier, three Naxals, including two women, were killed in an encounter with police in Rajnandgaon district on June 18 while a Maoist deputy commander was gunned down on June 19 in Kanker district.