On May 10, 61-year-old Karnan disappeared after checking out of a government guesthouse in Chennai, allegedly without paying the bills. 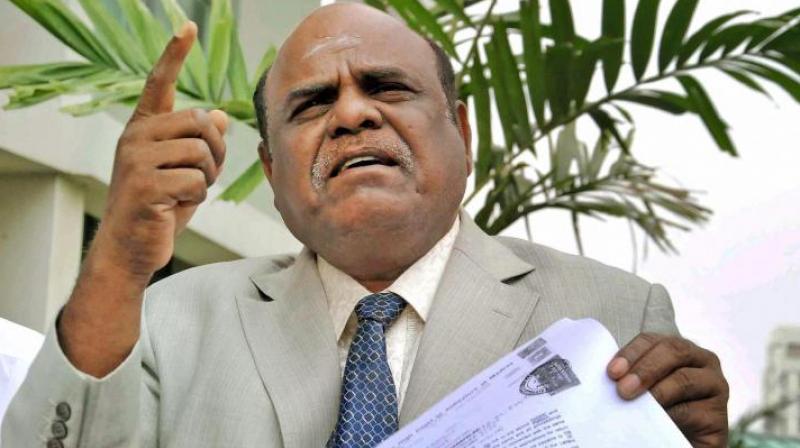 Chennai: Former Justice C.S. Karnan, retired Calcutta high court judge who was on the run for 40 days, was arrested from a private guest house in Malumachampatti, Coimbatore, by West Bengal police on Tuesday.

On May 9, a seven-member constitution bench, headed by Chief Justice J.S. Khehar, had sentenced Justice Karnan, then sitting Calcutta HC judge, to six months imprisonment in a contempt case.

On May 10, 61-year-old Karnan disappeared after checking out of a government guesthouse in Chennai, allegedly without paying the bills.

“We have arrested him finally and will be taking him to Kolkata immediately,” a relieved DGP Raj Kanojia, who was leading the team that was hunting for the judge for over a month, told this newspaper. Mr Karnan, a dalit who retired on June 12, told reporters at the Coimbatore airport that “I am not a terrorist. I will continue my fight against caste and corruption in judiciary”.

Though the West Bengal police team was not ready to disclose details of how they tracked the judge, sources said that the WB police had been tracking him systematically by following his mobile phone signals. “He was untraceable for some days when he was not using his phone and when he was not contacting people from his close circle,” sources said.

His lawyer, Mathews J. Nedumpara, said that he will be moving Mr Karnan’s bail petition in Supr-eme Court on Wednesday.

According to sources, though Mr Karnan had vanished on May 10 from Chennai, he was holed in the city for some days before moving to Panangad, in Kochi, Kerala.

He shifted to a lawyer’s house in Namakkal 10 days ago and from there moved to a guesthouse in Malumachampatti, Coimbatore, from where the WB police team arrested him.