India   All India  21 May 2019  Watch: Due to technical snag, Delhi Metro services affected on Yellow Line
India, All India

Photographs and video tweeted by passengers show the metro stuck on tracks and people deboarding and walking on the tracks. 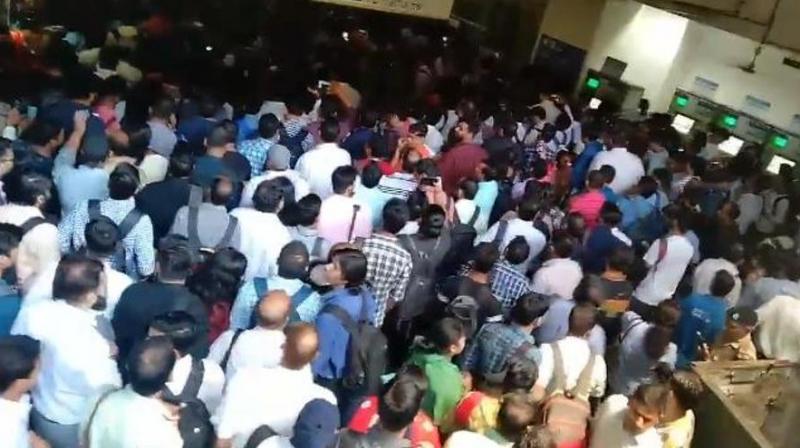 New Delhi: Services were disrupted on the Yellow Line of the Delhi Metro on Tuesday morning due to a technical glitch, leaving many passengers stranded. Yellow Line connects Samaypur Badli in the city to Huda City Centre in Gurgaon.

Photographs and video tweeted by passengers show the metro stuck on tracks and people deboarding and walking on the tracks. Huge rush of morning commuters was seen at metro stations.

#delhimetro is running till qutab minor, feeder bus from there to sultanpur. Too much rush at qutab minor, skip office and go home. pic.twitter.com/prt2mR2BzW

#delhimetro is stuck at Sultanpur metro station and the first prompt to update the passengers has come in 15 minutes. Until now we were all clueless, and of course, restless assuming everyone is late to office. Can someone head my meeting at 10? I don't think I am gonna make it!

Was stucked in INA metro from last 35 mins. Ended up taking an auto. Look at the rush at INA #delhimetro #lateforwork pic.twitter.com/RGauBVPUrM

People waiting for cabs, autos anything they can get on. No feeder service available at qutub minar. #dmrc #DelhiMetro #powershortage pic.twitter.com/lbjYLt7hnR

Due to the snag, commuters had a hard time reaching their destination and many passengers were stranded at the Qutub Minar station.

“Due to a technical snag at Chattarpur, train services have been affected on the Yellow Line. The issue is being rectified,” a senior DMRC official said.

Trains are being run in following loops temporarily -- between Huda City Centre and Sultanpur and between Samaypur Badli and Qutub Minar, he said.

“There will be no train movement between Sultanpur and Qutub Minar,” he said.