Fresh roads were laid from the cave to Kedarnath shrine. 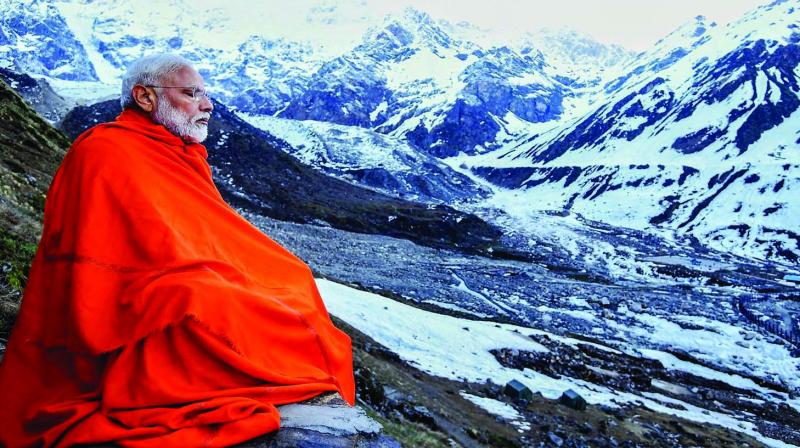 Prime Minister Narendra Modi during his visit to the Kedarnath valley on Saturday. (Photo: PTI)

Hyderabad: Old bathroom fittings were replaced with new ones including the geyser, new wifi router was in place besides a phone, the room plastered to give a new look, electricity supply restored and a brand new room heater with radiator too was purchased. In no time, the 'rudra' cave was spruced up with all new facilities.

Besides the multi layered security — three layers to be precise — who stood guard for India’s most powerful man in temperatures which dipped to minus three degrees, a battery of doctors including Cardiologists, dozens of personnel of State Disaster Response Force (SDRF) along with the local police and of course the Special Protection Group (SPG) personnel.

All of them had their eyes fixed on the cave while a group of electricians, plumbers remained on stand by throughout the night and so were more than two dozen porters (for transporting luggage and material) and several ‘palki’ walahs, just in case the VVIP had to be moved in palki.

Contingency plans are always there for the visit of any Prime Minister to any state or country.

But the recent night halt by Prime Minister Narendra Modi inside the ‘rudra’ cave in Kedarnath, at an at altitude of 11,700 feet up in the majestic himalayas — kept the SPG personnel and the Uttarakhand district administration on the edge throughout the 17 hours Modi spent inside the cave as this was the first time they had been guarding the VVIP who chose to stay in a cave, at that altitude and a hostile weather — perhaps a bigger threat than the ones emerging from the usual quarters.

“We came to know about his visit to Kedarnath five days ago and to make arrangements in the cave, 11,700 feet up in the Himalayas, its no ordinary task at this short notice. We swung into action and started making all the arrangements,”' top Uttarakhand government officials said.

Within the next 24 hours, multiple recces were taken up by the top government officials even as it snowed heavily followed by spells of rainfall. As is the normal drill before any visit of the PM, the SPG had already taken over Kedarnath four days prior to the PM’s visit. He arrived in Dehradun on May 18 on a two day visit and flew down straight to Kedarnath in a special helicopter.

The first task was to spruce up the cave and upgrade it completely for the use of the Prime Minister.

“From bathroom fittings to plastering the wall to wifi, phones, room heater etc, we had worked on everything including the back up (generators). Fresh roads were laid from the cave to the shrine. There was a contingency plan for everything and we had made a separate accommodation ready just in case the PM would have expressed his desire to shift from the cave. But he spent the entire time in the cave. At this altitude, oxygen is less and health is a major concern and therefore a battery of doctors including cardiologists were on stand by,” sources said.

Sources further added that the place of night halt (the cave) was peculiar and never in the past had the SPG found itself in a situation wherein it was tasked with securing a cave in which the VVIP was present.