Chairman Sivan offering prayers at the Venkateswara Temple said that this mission will be launched at 5:30am. 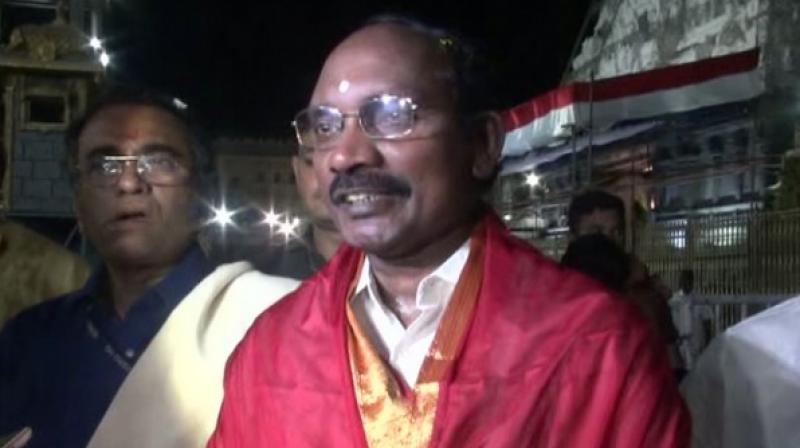 The 25-hour countdown for the launch of earth observation satellite onboard PSLV C-46 began at 4:30 in the morning. (Photo: ANI)

Tirumalai: Countdown has begun for the launch of PSLV-C 46 satellite on Wednesday that will be an earth observation satellite with high accurate observations, ISRO Chairman K Sivan said on Tuesday.

He told reporters that after offering prayers at the Venkateswara Temple here that this PSLV-C 46 mission will be launched at 5:30 in the morning and will carry onboard satellite RISAT-2B.

"This is a very important mission as far India is concerned. It's an excellent satellite. This is an earth observation satellite for remote sensing operation and is a very high, accurate observation," he said.

Sivan said that subsequently, ISRO's next mission will be the launch of Chandrayaan-2 between July 9 and 16 which will land on the moon on September 16.

The 25-hour countdown for the launch of earth observation satellite onboard PSLV C-46 began at 4:30 in the morning.

Reportedly, PSLV in its 48th mission will carry the 615-kg RISAT-2B into an orbit of 555 km at an inclination of 37 degrees. Notably, this will be the 72nd launch vehicle mission from Shar and 36th launch from the First Launch Pad.

In addition, it is the 14th flight of PSLV in the core-alone configuration.