They will also move EC to press for their demand of tallying the paper trail of votes with the electronic voting machine EVM figures. 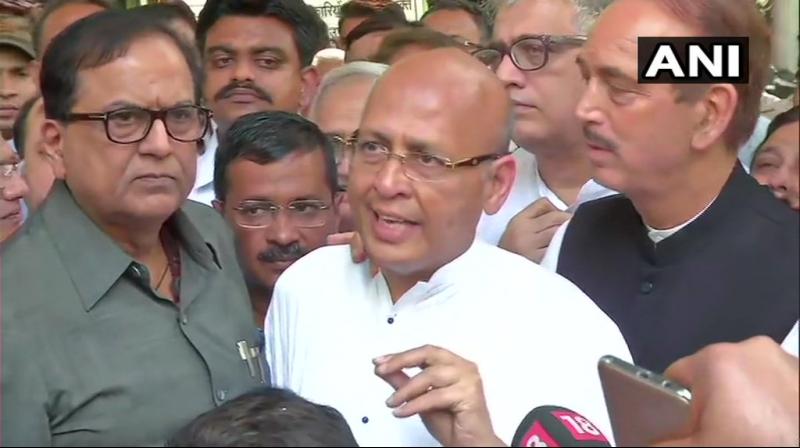 'If the subset is found poisonous, then the whole sample is discarded,' said Abhishek Manu Singhvi of Congress. (Photo: ANI | Twitter)

New Delhi: Top opposition leaders met here on Tuesday, ahead of the Lok Sabha poll results on May 23, to discuss the possibility of a non-NDA alliance staking claim to government formation.

They also met the Election Commission (EC) to press for their demand of tallying the paper trail of votes (VVPATs) with the electronic voting machine (EVM) figures.

“On VVPATs and the EVM tally, the EC is yet to come out with a procedure in case there is a mismatch. Even if there is one mismatch in the VVPAT samples picked for counting and EVMs, to maintain the integrity of the electoral process, all VVPATs in that Assembly segment must be counted,” Communist Party of India (Marxist) general secretary Yechury said.

Opposition parties turned out in high numbers at the election Commission office on Tuesday with various demands they termed as ‘confidence-building measures’.

Congress leader Abhishek Manu Singhvi said: "The Supreme Court has allowed for 5 VVPATs to be tallied. VVPATs be tallied first-up and there should be re-polling if any discrepancy is found. The EC said that they'd decide, they have an open-mind."

"If he EC disagrees with us, if 75% of vote is before you, how does it matter if VVPATs are counted first? EC hasn't decided," he added.

The Election Commission will meet on Wednesday to discuss the issue.

The Election Commission of India (ECI) has a problem with our demand of tallying votes registered in electronic voting machines (EVMs) with that of voter-verified paper audit trail (VVPAT) slips, said TDP president N Chandrababu Naidu here on Tuesday.

Naidu, who was talking to media persons after a delegation of 22 opposition parties met the EC here over EVM-VVPAT tallying issue, said: "We have a very genuine demand. We have repeatedly made representation to the EC and have even gone to the SC. We want that tallying of five EVM-VVPAT machines should be made at the beginning of the counting, but the EC has a problem."

"If any discrepancy is found in the tally, then VVPAT for the whole assembly segment should be counted. We do not know what is the problem of the Election Commission? Former Chief Election Commissioner has also endorsed our demand. Former President (Pranab Mukherjee) also made it very clear that EC should keep transparency and create confidence among Indian voters," he said.

"We are asking to respect the mandate. People's mandate cannot be manipulated. The EC is saying one blood sample is enough but if that sample is showing total pollution in the body, then you have to scan the whole body," said Naidu.

Naidu said that the opposition leaders have also demanded that if any discrepancy is found anywhere during EVM-VVPAT verification, then 100 per cent counting of paper slips of VVPATs of all polling stations of that assembly segment should be done.

Singhvi, speaking on the occasion, said: "If the subset is found poisonous, then the whole sample is discarded."

On May 7, the Supreme Court had turned down a review plea filed by 21 opposition parties seeking a direction to the EC to increase random physical verification of VVPAT from five to at least 50 per cent of EVMs.