Dalit man tied up, beaten to death in Gujarat; 5 arrested 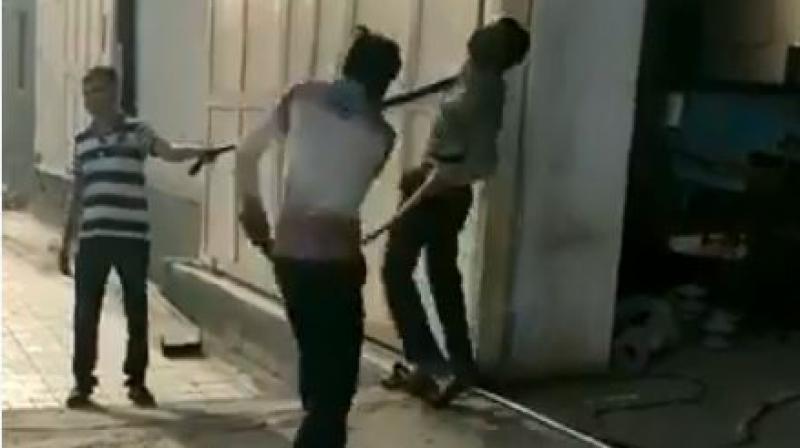 A video of the incident shows the Dalit man being tied up and beaten mercilessly with a stick by two men while he keeps crying out in pain. (Photo: Twitterscreengrab/@jigneshmevani80)

Rajkot: In a horrific incident, a Dalit man was allegedly beaten to death in Gujarat’s Rajkot on the orders of a factory owner.

A video clip of the incident shows the man, identified as Mukesh Vaniya, being tied up by ropes around his waist and beaten mercilessly with a stick by 2 men while he keeps shouting in pain. His wife was allegedly beaten too.

"Mr Mukesh Vaniya belonging to a scheduled caste was miserably thrashed and murdered by factory owners in Rajkot and his wife was brutally beaten up," he tweeted adding the hashtag #GujaratIsNot Safe4Dalits.

'Mr. Mukesh Vaniya belonging to a scheduled caste was miserably thrashed and murdered by factory owners in Rajkot and his wife was brutally beaten up'.#GujaratIsNotSafe4Dalit pic.twitter.com/ffJfn7rNSc

According to a report in NDTV, an FIR has been registered and five people, including the factory owner, have been arrested on charges of murder and under the law on atrocities against Scheduled Castes and Scheduled Tribes.

The incident took place on Sunday when Mukesh Vaniya and his wife Jaya were picking up waste materials littered outside a factory with the help of magnets when some workers, whose identities are yet to be ascertained, confronted them, accusing them of theft. They took him inside the factory, tied him up and began beating him.

However, the woman escaped to get help from their village nearby.

By the time she came back with some people, Vaniya was prone on the ground. He was later taken to a hospital where he was declared dead.