In a series of tweets — in Russian and then in English — on the eve of his visit to Russia, Modi said he looked forward to his meeting with Putin. 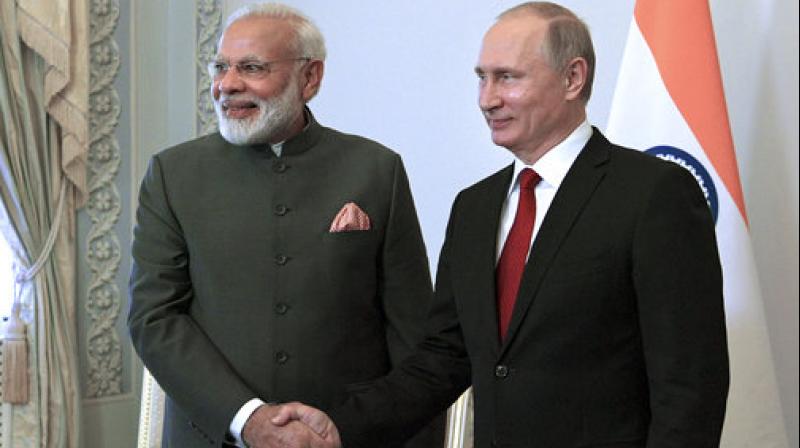 New Delhi: Prime Minister Narendra Modi on Sunday voiced the hope that his talks with President Vladimir Putin would further strengthen the “special and privileged” strategic partnership between India and Russia.

In a series of tweets — in Russian and then in English — on the eve of his visit to Russia, Mr Modi said he looked forward to his meeting with Putin.

“Greetings to the friendly people of Russia. I look forward to my visit to Sochi tomorrow and my meeting with President Putin. It is always a pleasure to meet him,” Modi tweeted.

During their informal summit in the Russian city of Sochi on Monday, the two leaders will primarily focus on global and regional issues, including the impact of the US decision to withdraw from a nuclear deal with Iran.

“Am confident the talks with President Putin will further strengthen the Special and Privileged Strategic Partnership between India and Russia,” Mr Modi said in another tweet.

Official sources said the two leaders would meet for 4-6 hours for the “agendaless” talks where deliberations on bilateral issues were likely to be limited.

They said the issues on the table might include the economic impact on India and Russia in the wake of the US withdrawal from the nuclear deal, the situation in Afghanistan and Syria, the threat of terrorism and matters relating to the upcoming SCO (Shanghai Cooperation Organisation) and BRICS summits.

The sources said the possible impact of the US sanctions against Russia under the Countering America’s Adversaries through Sanctions Act (CAATSA) on Indo-Russia defence cooperation may also figure during the talks between Modi and Putin. India is not going to allow its defence engagement with Russia to be dictated by any other country, the sources said, adding New Delhi has been lobbying with the Trump administration on the issue.

The aim of the informal summit is to use the friendship and trust between the two countries to create convergence on key global and regional issues, the sources said.

The two leaders may also deliberate on extending the Indo-Russia civil nuclear cooperation to third countries, possible areas for cooperation for the International North-South Transport Corridor project, India’s engagement with the five-nation Eurasian Economic Union and the situation in the Korean peninsula.