Over 60 percent of the poppy and cannabis produced in Himachal Pradesh is smuggled out to countries like Israel, Italy and Holland. 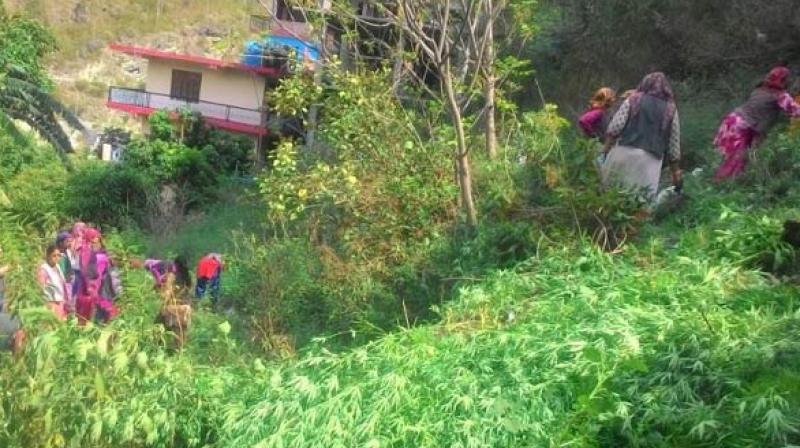 The locals who are participating in this campaign, are concerned about the degrading condition of the youth thanks to the drug. (Photo: ANI Twitter)

Shimla (Himachal Pradesh): To support anti-drug campaign and shun drugs in Himachal Pradesh, the local women in Rampur area of Shimla district have started a campaign to destroy the cannabis plantation.

Dozens of villagers gathered in Rampur of Shimla district and started uprooting the cannabis plants grown in the locality.

The locals who are participating in this campaign, are concerned about the degrading condition of the youth thanks to the drug. They are resolute to carry on with this drive in days to come, as it was observed that drug addiction among youth has been increasing over the years.

Kaanta Devi, a local said she has seen youth ruining their lives through the drug, adding that she has decided to make the area free of drug abuse.

Another local, Meena Kumari said they have destroyed wild cannabis to discourage people to abuse it as drugs.

"Addiction to drugs is destroying the future of the young generation of the rural areas in Himachal," she added.

According to reports, in Kullu district the plantation of cannabis is more confined to the higher reaches of Malana, Kasol and other areas, while in Chamba district, bordering the Doda area of Jammu and Kashmir, it is done mainly in the remote areas of Kehar, Tissa and Bharmour.

Over 60 percent of the poppy and cannabis produced in Himachal Pradesh is smuggled out to countries like Israel, Italy, Holland and other European countries. The remaining finds its way to Nepal or Indian states like Goa, Punjab and Delhi.