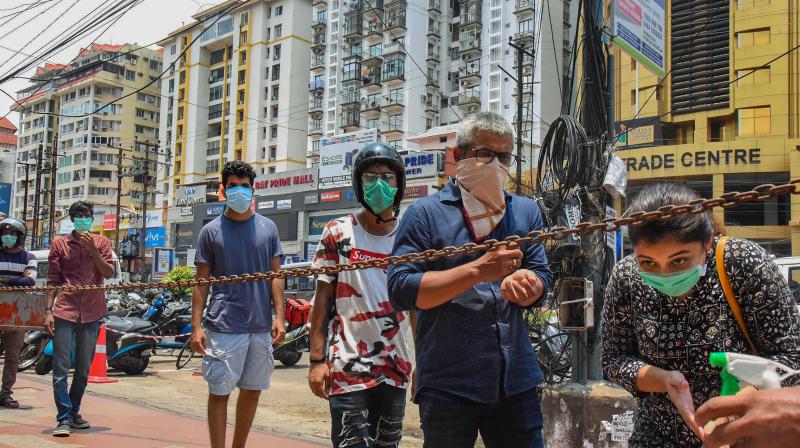 People queue up at a mobile phone shopping complex to purchase and repair phones in Kochi. PTI photo

Kochi: Kerala’s successful fight against global pandemic of Covid 19 has attained worldwide attention and the Left ruled government was basking in the glory of its success in handling the virus outbreak.

Kerala’s success story with interviews and profiles of Chief Minister Pinarayi Vijayan and health minister K. K Shailaja has been featured in many leading national and international media.

However, the compliments turned into brickbats when the opposition in Kerala raised allegations against the government over its deal with a US company for collating and analysing the data of Covid 19 patients and persons under quarantine. It was the Congress – led UDF, the opposition, which raised allegation of violation of data privacy protocol.

Opposition leader Ramesh Chennithala and senior Congress leaders like Oomen Chandy lashed at the LDF government citing the alleged irregularities in the agreement and for compromising the privacy of several thousands of people.

Sprinklr, launched in January 2010 in New York is an IT company which develops a SaaS customer experience management (CXM) platform. It was founded and owned by a Keralite Ragy Thomas.

The data collected by healthcare workers including details of Covid patients, suspects and home quarantined persons are compiled and analysed by Sprinklr. Details of the isolated persons like their age, health conditions and chronic illnesses if any have been collected using an application developed by Sprinklr.

The data compiled by the company will be useful for the state government to identify Covid hotspots, vulnerable areas and in taking preventive measures like reverse quarantine, in which the aged and people with other co morbidities are isolated.

It was on April 2 that the state government signed the purchase order with the US company while the deal has retrospective effect from March 25. The project’s validity is till September 24 or till the end of the pandemic, whichever is earlier. The government’s use of Sprinklr software is free of charge till September 24.

Allegations against the deal

The data deal has been signed without the clearance from other government departments or the state cabinet. The government compromised the crucial health data of several thousands of people by signing an agreement with the US company flouting the procedures, alleged the Opposition.

The reports that Sprinklr has links with the international pharmaceutical company Pfizer which has been engaged in developing vaccine against for novel coronavirus and other anti-viral drugs has intensified the allegations against state government.

Senior Congress leader and MLA V.D Satheesan said that with the reports on Sprinklr’s ties with Pfizer, it has become crystal clear that the drug company might access details of Covid patients and quarantined persons for their research.

A senior Congress leader M.M Hassan has sought a CBI probe in to the data deal.

Meanwhile, a petition has been filed before the Kerala High Court over the agreement with Sprinklr for data transfer.

Chief minister Pinarayi Vijayan, who is also the minister of IT, has strongly defended the data deal saying that there are no irregularities involved in the pact. While talking to media persons on Monday, Pinarayi said that he doesn’t want to comment further on the deal as the Opposition and people with vested interests are trying to stir up a controversy.

“The government’s focus is now on combating the pandemic and to get rid of it. And the state’s efforts are getting support from across the world,” he added.

Meanwhile, state IT secretary M Sivasankar has earlier clarified the government’s stand on the deal. “Sprinklr is a SaaS (Software as a Service) firm which offer its service to agencies like the World Health Organization. The company offered its service free of charge till September and considering the emergency requirement of the state, it has been decided to avail its service. The decision has been taken on war-footing using my discretionary power and not consulted law or other government departments,” he said.

The IT department has made it clear that there is no question of data theft or leakage. Following the controversy, the government has released documents of the agreement which state that the data belong to the state government and is stored in servers within the country.