The TDP had recently walked out of the BJP-led NDA after the Centre rejected its demand for special status for AP. 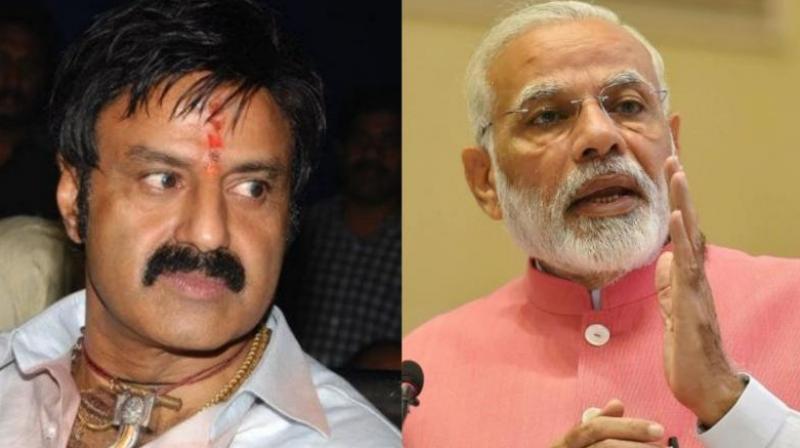 Balakrishna, who is also the brother-in-law of Andhra Pradesh Chief Minister N Chandrababu Naidu was talking at an event organised by the CM on Friday. (Photo: File)

Vijayawada: The political battle between the Bharatiya Janata Party (BJP) and its former ally Telugu Desam Party (TDP) hit a new low after film star and Hindupur MLA Nandamuri Balakrishna lashed out at Prime Minister Narendra Modi caling him a "cheat" and a "traitor".

He said the PM had 'betrayed' Andhra Pradesh.

"The war has started now..the Prime Minister has betrayed Andhra Pradesh. He is indulging in murky politics in the state, despite the fact that BJP will not win a single seat in the state," he said.

Balakrishna, who is also the brother-in-law of Andhra Pradesh Chief Minister N Chandrababu Naidu was talking at an event organised by the CM on Friday.

In a scathing attack on Modi, Balakrishna said "Modiji, Andhra Pradesh is not Gujarat. Your hukumat (rule) doesn't work here. The Telugu people are courageous. They showed their power when the Congress government in Delhi tried to pull down NTR government in 1984."

"Not only are the people of Andhra but the entire India is against you right now. I am telling now that you are a gaddar (traitor), a namak haram (cheat). Come outside and meet people. Talk to them or they will chase you, beat you, wherever you go. You cannot escape even if you go and sit in a bunker," he added.

Chandrababu Naidu, who turned 68 on Friday, had organised an event where he observed a one-day hunger strike against the 'Centre's non-cooperation with the state'.

In a related development, BJP floor leader in the Andhra Pradesh assembly Vishnu Kumar Raju submitted a memorandum to Governor ESL Narasimhan against Balakrishna's 'derogatory' remarks and sought approrpriate action against him.

The BJP had taken strong exception to the actor-MLA's outburst and had demanded an apology.

"He should wash his mouth with acid. Balakrishna's speech indicated that he has gone mad. He should be housed in a mental hospital," state BJP spokesman Satyamurthy said in a statement.

The TDP had recently walked out of the BJP-led NDA after the Centre rejected its demand for according special category status.