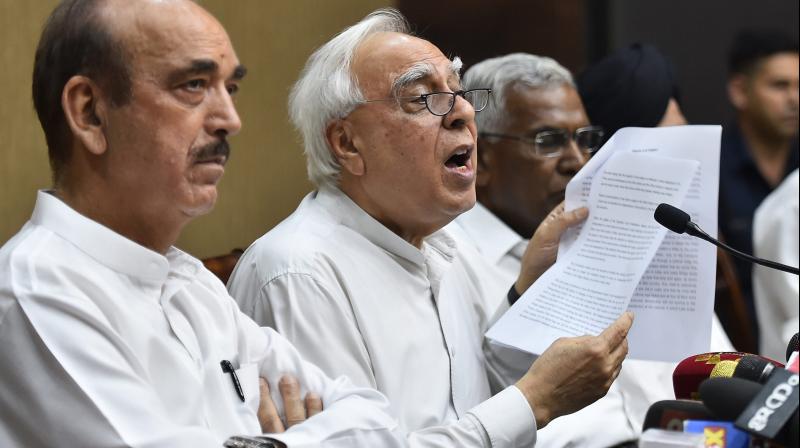 New Delhi: In an unprecedented move, Congress and six other Opposition parties on Friday moved a notice for the impeachment of Chief Justice of India Dipak Misra, accusing him of five counts of “misbehavior” and “misusing” authority. The Opposition parties first met in the room of the Leader of Opposition in the Rajya Sabha Ghulam Nabi Azad, after which they proceeded to meet Vice-President and Rajya Sabha, chairman M. Venkaiah Naidu and handed over a notice for the impeachment of the Chief Justice of India (CJI) with signatures of 64 MPs of the Upper House. However, some notes of discord were heard from within the Congress. Interestingly, former Prime Minister Dr Manmohan Singh was not one of the signatories to the impeachment notice.

A decision on the admission of the impeachment notice against the CJI will be taken by the chairman of the Rajya Sabha, following legal consultations. No Chief Justice of India has ever been impeached. 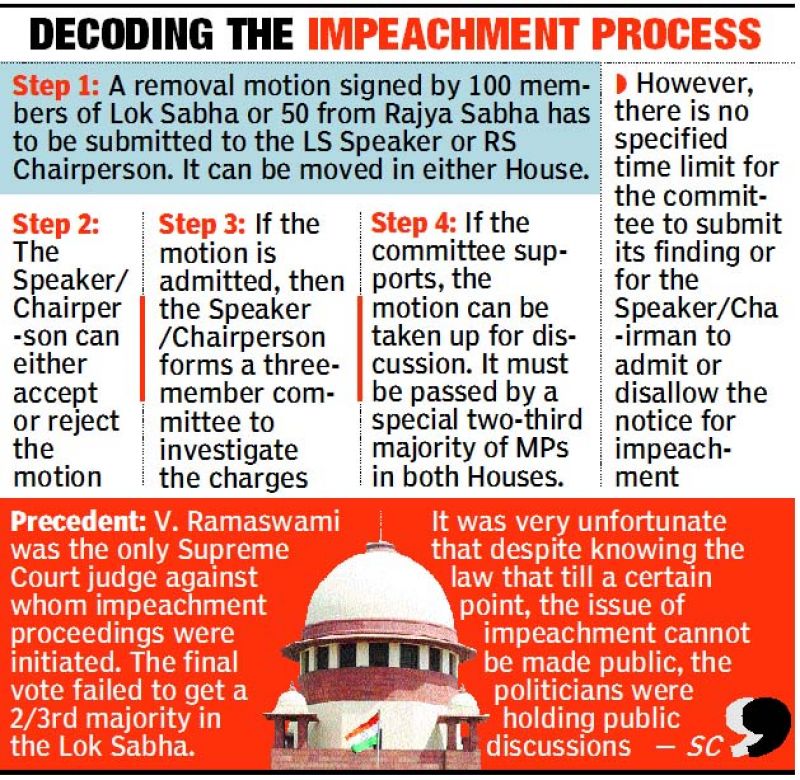 Addressing a joint press conference of Congress, Left parties and the NCP, senior Congress leader Kapil Sibal said, “We wish this day had never come.” He said the step has been taken “with a heavy heart” to protect the independence of the judiciary. Mr Sibal further added,  “As a representatives of the people, we are entitled to hold the Chief Justice accountable, just as we are accountable to the people. The majesty of the law is more important than the majesty of any office.”

The MPs who signed the notice belong to the Congress, the NCP, the CPI-M, the CPI, the SP, the BSP and the Indian Union Muslim League (IUML). The Trinamul Congress, DMK, RJD and some other parties have backed out from supporting the move.

On the issue of several important Opposition leaders including former Prime Minister Dr Manmohan Singh’s signatures being missing from the impeachment notice, Mr Sibal said, “We did not want to involve Dr Singh, he being a former PM.” When asked why other important leaders did not sign the notice, Mr Sibal said: “We didn’t want a few others to be embarrassed as certain matters are pending.”

The five allegations of misbehavior mentioned in the impeachment notice include the “serious charge” of “antedating” (backdating) of an order for listing of a petition related to the investigation against the Prasad Education Trust in the Supreme Court. Denial of permission to proceed against a retired high court judge in the same matter. Another charge is of listing the petition against the Prasad Education Trust before himself, even when he was heading the Constitution bench, and doing so was against the convention. The fourth charge pertains to a piece of land which CJI Misra acquired as an advocate by giving a “false affidavit” and the plot was surrendered in 2012 when he was elevated to the Supreme Court, even though orders cancelling the allotment were given in 1985. The fifth charge relates to “the abuse of exercise of power by the Chief Justice in choosing to send sensitive matters to particular benches by misusing his authority as Master of the Roster with the likely intent to influence the outcome”.

The Congress vehemently denied the charge that it was moving an impeachment notice as the petition in the death of Judge Loya was rejected by the apex court. Mr Azad said that they (Opposition parties) had sought time with the Chairman of the Rajya Sabha about a week ago. He further added, “The process had begun almost a month ago during the second part of the Budget Session. The signatures are also dated.” On being asked as to why the impeachment notice was being given now Mr Sibal said, “We were hoping that the anguish of the four senior judges of the Supreme Court as reflected in their statements to the Press would be addressed by the Chief Justice and the Chief Justice in response would set his house in order. More than three months have passed. Nothing has changed.”  He further added, “Recent communications of two senior judges to the Chief Justice reveal that the Chief Justice has not asserted the independence of the judiciary in the face of interference by the executive.”

On January 12 this year, four top-level Supreme Court (SC) judges, had in a press conference, made complaints against Dipak Misra, on the grounds of administrative and judicial irregularity in the apex court. Justices Jasti Chelameswar, Ranjan Gogoi, M.B. Lokur and Kurien Joseph had said that Justice Misra was assigning important cases in an arbitrary manner to junior judges, ignoring these four senior judges. “India’s democracy is at stake,” the judges had alleged and questioned the sacred position of the Chief Justice of India.

Former external affairs minister and senior advocate, Salman Khurshid said that he is not privy to discussions that have taken place between different parties and for him to reflect specifically on whether the grounds for impeachement are justified or not would be “unfair”. “I don’t think anyone should cast aspersions on the judiciary. It is well-equipped to handle very difficult matters. Not everyone will always agree with the judiciary. Not even the judiciary itself agrees with itself…,” said Mr Khurshid, adding, “Impeachment is too serious a matter to be played with frivolously on the grounds of disagreement with any judgement or point of view of the Court.”

An impeachment motion in Rajya Sabha has to be supported by at least 50 MPs, while one in the Lok Sabha is to be supported by 100 MPs. Once the notice for impeachment is submitted, the Rajya Sabha chairman will ascertain if there is merit or ground for moving such a motion or whether it can be rejected. He may form a committee to look into it, if he finds merit in it. However there is no specified time limit for the committee to submit its finding or for the Chairman of the Rajya Sabha to admit or disallow the notice for impeachment.