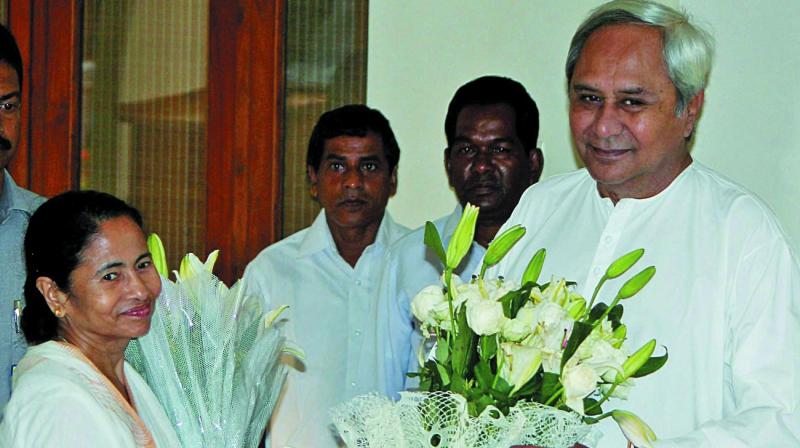 Bhubaneswar: West Bengal chief minister and Trinamul Congress (TCM) supremo Mamata Banerjee on Thursday said her efforts to build a “federal front” to counter the growth of the BJP was on and she would continue to pursue it.

“That’s (formation of federal front) always there in my agenda and I will continue to pursue it. But today, we didn’t discuss any politics. I came to meet Odisha chief minister and BJD president Naveen Patnaik and wish him good health. His father Biju Patnaik was very fond of me. Once, he sent the state plane to bring me here. I share a good relationship with Mr Patnaik’s family,” Ms Banerjee told reporters here after meeting her Odisha counterpart Naveen Patnaik at the latter’s residence.

The WB chief minister, who spent two days in the pilgrim city Puri — met Naveen at his resident at 4.30 pm amid speculation that both the leaders — who are now seen by the BJP as its strong political opponents — would have long discussion on countering the saffron surge in their respective states. However, both leaders had a brief meeting of about seven minutes.

Although Naveen tried to downplay their meeting as a “courtesy call,” sources said both the leaders discussed strategies on how to check the growth of the BJP in eastern India, especially in West Bengal and Odisha. Besides, they also discussed about the CBI’s action against the top leaders of the TMC and BJD in chit fund scam.

As many as two TMC MPs and one BJD MP are currently behind bars in chit fund scam after being arrested by the CBI in the multi-crore scam. “Mamata Banerjee paid me a courtesy call. No politics was discussed today,” said Naveen.