Al trains cancelled on Sunday, no catering until further notice 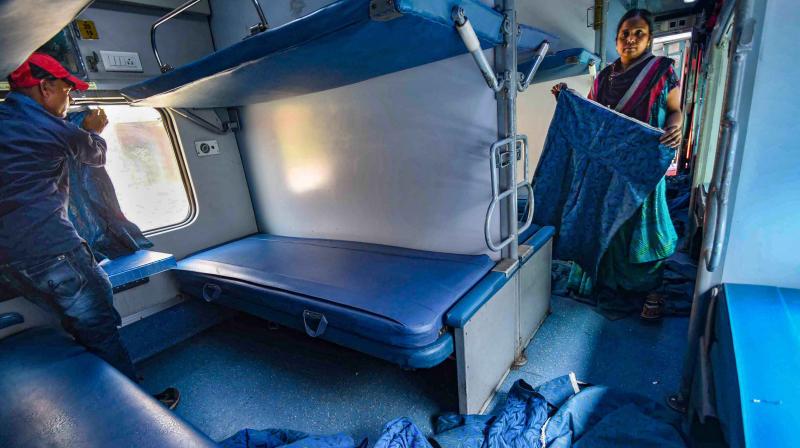 A railway worker cleans a compartment of a train at a yard in the Patna railway station on March 20. The Indian Railways has cancelled on trains on Sunday in view of a nationwide shutdown called by prime minister Narendra Modi. (PTI)

New Delhi: The Indian Railways has cancelled all train services on Sunday in view of the Janata Curfew called by prime minister Narendra Modi. All mail and express trains will stop services from 4 am to 10 pm on Sunday while all suburban train services will be reduced to a bare minimum.

“All passenger trains originating between midnight of March 21/March 22 to 10 pm on March 22 (approximately 2,400 services) shall not be run," an order issued by the railways said.

"However, the passenger train services already on the run at 7 am on Sunday will be allowed to run to destinations. Divisions should keep a watch and trains which are empty could be short-terminated, if required,” it added.

The railways said people who find themselves stuck at stations due to the cancellation of connecting trains would be accommodated in waiting halls, waiting rooms and on the concourse.

In other action, Indian Railway Catering and Toursim Corporation (IRCTC) has ordered closure of all onboard catering services in mail or express trains from March 22 until further notice in view of the coronavirus outbreak.

"The static units supplying meals to prepaid trains which are in operation may continue to operate. The onboard catering services in mail express trains and TSV trains should be closed until further advice," the order stated.

It also said that if there is a demand of onboard services then only propriety article depot (PAD) items, tea and coffee may be allowed to be sold on trains.