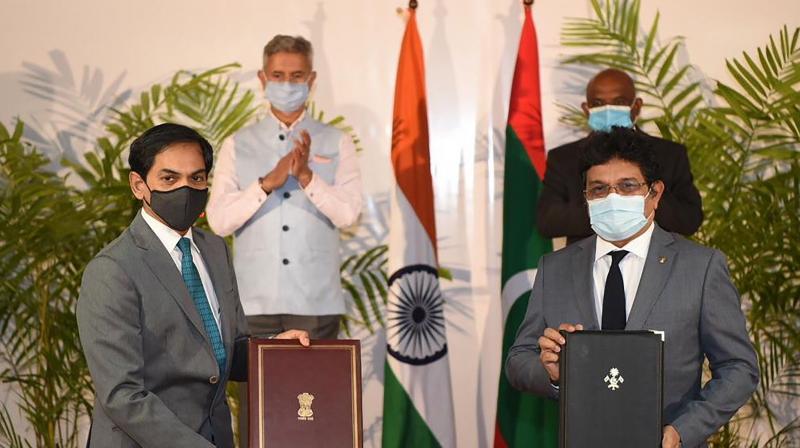 External Affairs Minister S Jaishankar witnesses the exchange of agreements between India and Maldives on a wide range of domains. (PTI)

It became possible due to the creation of an ‘Air Travel Bubble’ to facilitate the movement of people from both sides for the purpose of employment, tourism, medical emergencies and so on.

Maldives was the first neighbouring country with which an air bubble was operationalised and this boosted their tourist inflow. India had also undertaken a series of economic and financial initiatives at the peak of the pandemic to revive Maldivian economy and provide the muchneeded budgetary cushion to its dwindling revenues, primarily driven by tourism.

These included  the extension of soft loan of US$250 million for budgetary support of the Maldives for the implementation of Greater Male Connectivity Project which is the largest civilian infrastructure project in the Maldives, connecting Male with three neighbouring islands by the construction of a bridge-and causeway link spanning 6.7 km, through a financial package consisting of a grant of US$100 million and a new Line of Credit of US$400 million.

In addition, Maldives was the first country to receive Covid vaccines from India, with New Delhi gifting one lakh doses to the tiny archipelago nation. Indo-Maldivian ties have become extremely close ever since President Ibrahim Mohamed Solih assumed office in the in November, 2018.

After completing his two-day visit on Sunday, the EAM will visit the small Indian Ocean nation of Mauritius on February 22-23.