Among the dead are the KSRTC bus driver V. Grees (43) of Ernakulam and conductor R. Baiju of Veligandi in Kerala and five women. 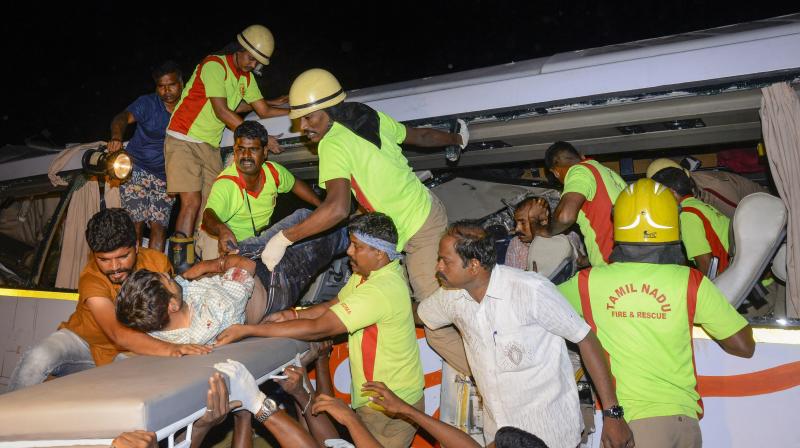 COIMBATORE: As many as 19 passengers on board an Ernakulam-bound Kerala Road Transport Corporation bus died on the spot and another 25 were injured when the bus collided head-on with a speeding overloaded container lorry which was coming in the wrong lane in the opposite direction in the early hours of Thursday. The accident happened at Thirumuruganpoondi in Tirupur district on the Avinashi- Salem bypass around 3: 25 am, according to police.

Among the dead are the KSRTC bus driver V. Grees (43) of Ernakulam and conductor R. Baiju of Veligandi in Kerala and five women. A. Hemaraj (38), from Ottapalam in Kerala, the lorry driver who fled the accident scene, was detained by Tirupur police. The post-mortem of the 19 deceased was carried out at the Government Hospital in Avinashi and bodies of the five female and 13 males were handed over to the families in the evening.

Of the dead, Kirankumar (30) from Tumkur is from Karnataka, while others are from Kerala. Of the 25 injured passengers, those who suffered minor injuries were treated as outpatients while the ones who suffered serious injuries are undergoing treatment at the government hospitals and private hospitals in Avinashi, Tirupur and Coimbatore.

Kerala chief minister Pinarayi Vijayan said the state will bear the treatment expenses of the injured.

The cause of the accident is being probed by the police. Preliminary investigation brings to light that either the driver of the overloaded container lorry could have dozed off while at the wheel. Another narrative also points out that a tyre burst could have caused the container lorry driver to have lost control of the vehicle leading it to ram the centre median on the road before colliding head-on with the bus.