India   All India  21 Feb 2019  'Why PM not speaking against harassment of Kashmiri people?': Omar Abdullah
India, All India

'Why PM not speaking against harassment of Kashmiri people?': Omar Abdullah

Omar Abdullah lashed out for withdrawing security of Hurriyat leaders and others, and called it 'regressive step'. 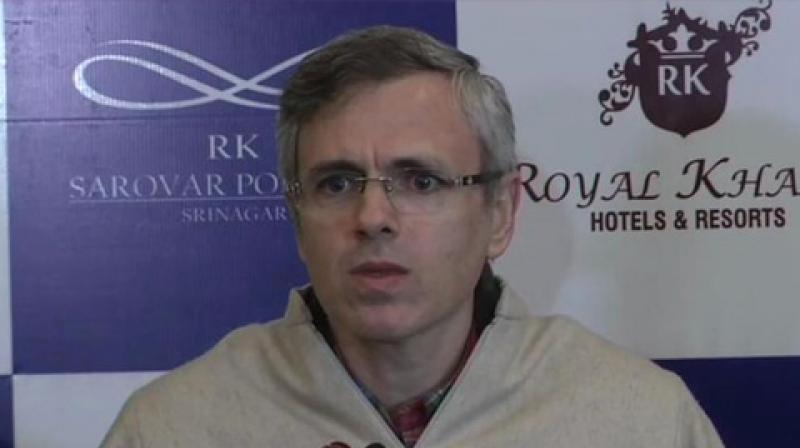 Abdullah stated that the security has not been withdrawn only from the separatists but also main stream politicians, particularly at a time when the central government wants maximum participation in the upcoming Lok Sabha elections. (Photo: ANI)

Srinagar: National Conference (NC) leader Omar Abdullah on Thursday lashed out at the central and Jammu and Kashmir governments for withdrawing the security of Hurriyat leaders and others, and called it a “regressive step”.

“Withdrawal of security of separatist leaders is a regressive step: It is the duty of the state to provide security to its people. If anything happens, they will be held responsible for it,” Abdullah said during a press conference here.

Abdullah stated that the security has not been withdrawn only from the separatists but also main stream politicians, particularly at a time when the central government wants maximum participation in the upcoming Lok Sabha elections.

The state government had on Wednesday downgraded and withdrew the security of 18 Hurriyat leaders. According to the spokesperson of the Home Department, it was felt that providing security to these separatist leaders is wastage of scarce state resources, which could better be utilised elsewhere. This is in addition to four separatist leaders whose security was withdrawn on Sunday.

Besides them, the security of 155 political persons and activists, who did not require the security provided to them based on their threat assessment and their activities, was also withdrawn.

Meanwhile, Abdullah went on to criticise Prime Minister Narendra Modi and the Congress party for not speaking against the alleged harassment of Kashmiri people in various parts of the country.

“We were thinking that this matter will be investigated at the highest level… We thought the Prime Minister will condemn the (Meghalaya) Governor’s statement. We can understand that the Prime Minister must have been busy, but the Home Minister should have said that these things won’t work, strong actions will be taken against these people. But we only heard silence from their side and nothing else. (waha se hume khamoshi aur khamoshi ke alawa kuch aur sunne ko nahi mila). These people are taking advantage of our problem to take forward their political interests,” Abdullah said.

Meghalaya Governor Tathagata Roy on Wednesday stirred a hornet’s nest by expressing solidarity with the call given by a retired Army Colonel to “boycott everything that is Kashmiri” in view of the recent Pulwama terror attack.

Abdullah said, “While one Governor talked about ‘economical boycott’, another Governor (Kalyan Singh) talked about revoking Article 370. Why they didn’t say similar things during the attack in Chhattisgarh? So, what is our fault? Is it only because there are majority of Muslims in Jammu and Kashmir compared to other states? Will we be punished time and again for this?”