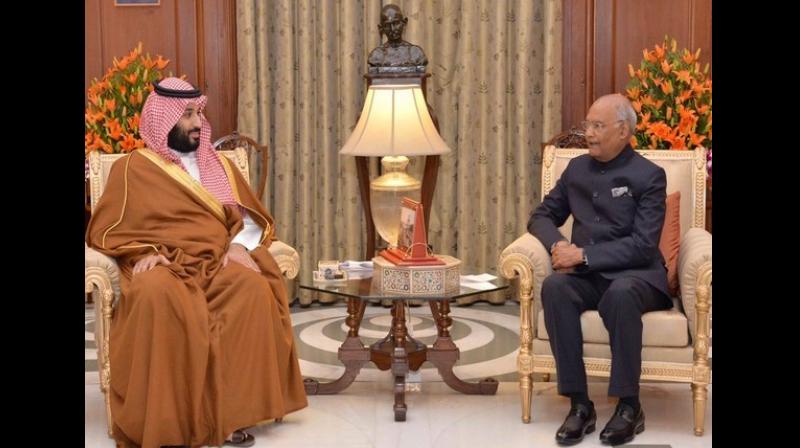 Welcoming the crown prince on his first state visit to India, the President said India cherishes its cordial and friendly relations with the Kingdom of Saudi Arabia. (Photo: ANI)

New Delhi: President Ram Nath Kovind on Wednesday expressed India's wish to be a strong and reliable partner in Saudi Arabia's Vision 2030 as he hosted a banquet for the Gulf kingdom's Crown Prince Mohammed bin Salman at Rashtrapati Bhavan here.

Welcoming the crown prince on his first state visit to India, the President said India cherishes its cordial and friendly relations with the Kingdom of Saudi Arabia.

India considers the Gulf region as its extended neighborhood.

The ever-expanding scope of India-Saudi Arabia bilateral relations demands sustained strategic engagement and frequent interactions between the two sides at all levels, according to a statement put out by Rashtrapati Bhawan that quoted Kovind.

President Kovind and the crown prince, commonly known as MBS,  also held talks on counter-terrorism and bilateral ties between the two countries.

Citing terrorism as the gravest threat to humanity, Kovind said in a statement on his official twitter handle, "India and Saudi Arabia, and the global community must come together to defeat and destroy these evil forces and combat radicalization."

Earlier in the day, in a joint statement, India and Saudi Arabia have condemned, in the strongest terms, the recent terrorist attack on Indian forces in Pulwama in Jammu and Kashmir.

MBS who arrived with the senior-delegation on his maiden two-day visit on February 19, signed five Memoranda of Understanding with Prime Minister Narendra Modi in areas of investment, tourism, housing and information, and broadcasting.

Addressing the visible enhancement of bilateral trade ties between two countries over the past few years, Kovind said, however, there exists further potential.
"Saudi Arabia continues to be our most important source of energy. We need to take the current buyer-seller relationship to a strategic level," he said.

The President said that India wishes to be a partner in the Kingdom of Saudi Arabia’s ‘Vision 2030’. "These are complementarities between our economies," he said.

"Indian companies have created jobs in Saudi Arabia, especially in the tech sector. India deeply values Saudi Arabia as a reliable partner for its energy security. We are delighted at Aramco’s participation in the upcoming world’s largest greenfield oil refinery" the President said.