This is Prime Minister's second visit to the Republic of Korea after his state visit in May 2015. 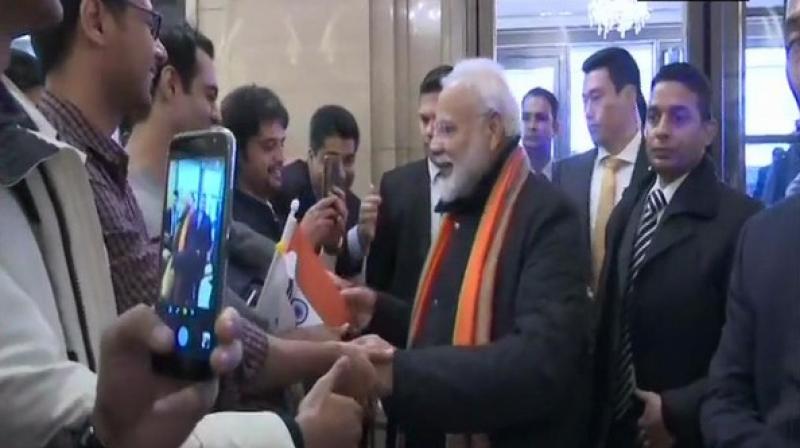 Upon the Prime Minister's arrival in Seoul Indians who were waiting for him in the hotel lobby, waived the tricolor and took selfies with him. (Photo: ANI)

This is the Prime Minister's second visit to the Republic of Korea after his state visit in May 2015.

Before embarking on the visit the Prime Minister described South Korea as a valued friend with which India shared special strategic partnership initiatives such as ‘Make in India’,  ‘Start-Up India’ and ‘Clean India’.

According to a foreign ministry spokesperson, Raveesh Kumar during this visit, the Prime Minister is scheduled to have bilateral and business engagements, unveil a bust of Mahatma Gandhi and accept the Seoul Peace Prize conferred upon him. He will also address the Indian community.

Raveesh Kumar said that this visit will strengthen India's special strategic partnership with South Korea and will introduce a new dimension in 'Look East Policy'.

"We regard the Republic of Korea as a valued friend, a nation with which we have a Special Strategic Partnership. As fellow democracies, India and the ROK have shared values and a shared vision for regional and global peace. As fellow market economies, our needs and strengths are complementary," the Prime Minister said.

Before leaving New Delhi, the Prime Minister also tweeted, "During our talks, President @moonriver365 and I will take forward our conversations from last year on how best to advance the India-ROK partnership. I will also meet business leaders,  the Indian community as well as eminent persons from all walks of life."

He will have extensive talks with President Moon Jae-in after which some MoUs are expected to be signed.

Waited for him in the hotel lobby, Indians, presented in large numbers, waived flag and took selfies with the Indian leader.

On his second visit to the country as the Prime Minister, Modi will receive the Seoul Peace Prize, which was announced by the Seoul Peace Prize Cultural Foundation in October last year in recognition of his dedicated service to international cooperation, global growth, and human development.

“The growing depth and variety in our relationship have been accentuated by the harmony between our ‘Act East’ Policy and ROK’s ‘New Southern’ Policy. Working together, we are determined to take our relationship forward as a ‘future-oriented partnership for People, Prosperity, and Peace’,” he said.

“Our collaboration in the field of science and technology is encouraging, with our joint research ranging from basic to advanced sciences,” Modi added.

Meanwhile upon the Prime Minister's arrival in Seoul Indians who were waiting for him in the hotel lobby, waived the tricolor and took selfies with him.

The visit is Prime Minister Modi's second visit to the Republic of Korea and the second summit meeting with President Moon Jae-in. The South Korean president visited India in July 2018.